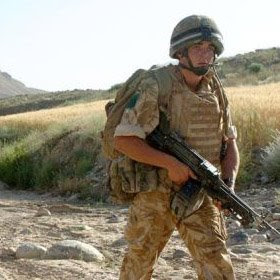 While the UK is cosying up to the EU, with its support for the EU navy, it seems to be getting less support from the Americans for its efforts in Afghanistan.

That is certainly the case, according to the Times this morning, which has it that the US is accusing Britain "over [its] military failings in Afghanistan."

The source of the accusations (plural) is identified as Robert Gates, the US Defence Secretary, a man who has some good knowledge of counter-insurgency operations and who has had some impressive things to say about his own military. Furthermore, he must have something going for him as he was appointed by Bush and has been asked to remain in his job under Barack Obama.

Anyhow, it is Gates who is "understood" to have expressed strong reservations about counterinsurgency operations in British-controlled Helmand province.

One of his concerns seems to be that, since a total of 132 British soldiers have now died in Afghanistan since 2001, the government is worried about public opinion turning against the campaign. It is thus, as it was in Iraq, overly risk averse, with strategy being dictated by the need to avoid casualties rather than by operational requirements.

This is coming to a head with US plans to mount a "surge", contrasted with the British reluctance to commit large numbers of extra troops. British officials are thus concerned that the US may take over control of Helmand – if the British fail to step up to the plate.

The willingness of the US to intervene in the British zone has been a recent feature of the Afghani campaign. Unlike Iraq, where the management of the southern zone was left entirely to the British – even when it was obvious that it was going belly up – US forces have already contributed considerable forces to operations in the British area, providing US airborne troops for the re-capture of Musa Qala last year and US Marines for operations in Garmsir earlier this year.

That the Americans have had to intervene may be behind what we are told are "grievances" over Britain's lack of equipment, including helicopters, the latter having left troops unable to perform the same tasks as US counterparts and led to more cautious tactics.

That was certainly the case in Musa Qala, where troops from the elite 82nd airborne spearheaded the assault, being flown in by helicopter to the northern outskirts of the town. In that one operation, the US deployed more helicopters than the entire contingent fielded by the UK in Afghanistan.

There is also grumbling, we are told, about the regularity with which US airstrikes are called to rescue British troops – the US providing about 90 percent of the air support across the entire theatre. Much valued though the British air contribution is, there are simply not enough aircraft to cover the entire range of UK ground operations.

But something which is almost certainly a legacy of Iraq is reported "tension and resentment" over the air of superiority adopted by British commanders such as Brigadier Nigel Aylwin-Foster. He, according to The Times has suggested that his American counterparts needed to take lessons from Britain's experience in Northern Ireland and Malaya.

The paper also tells us that David Kilcullen, an adviser to the US State Department, told a recent seminar that there had been "lots of fairly snide criticism" from the British whose attitude had been: "Look at us, we're on the street in our soft caps and everyone loves us."

The repost, not without justice, is that such claims have been undercut by the performance since then. "It would be fair to say that in 2006 the British Army was defeated in the field in southern Iraq," says Kilcullen.

At the same semiar, Daniel Marston, an American consultant who until recently was a senior lecturer at the Royal Military Academy at Sandhurst and has been embedded with troops in Afghanistan, said that Britain was being forced to learn some humility after being "embarrassed by their performance".

This is then explained by Carter Malkesian, an expert at the Centre of Naval Analysis. He says: "Among those in the Department of Defence who are paying attention to these operations, Britain's reputation has probably fallen. But they still recognise that the British Army, among all the allies, are those that fight the most and fight the best."

Needless to say, a "senior British defence source" counters these points by saying: "We are punching above our weight in Afghanistan and are the second biggest contributor of all the Nato allies, so for anyone to single us out for criticism is plainly wrong and unfair."

However, whether the British find criticism hard to take, or not, there is no question that the reputation of the British Army has been considerably tarnished by its performance in Iraq. And, whatever might be the skillset of the British military in Afghanistan, they are no longer in a position to lecture the Americans about how to conduct counter-insurgency operations.

However, if the British are not disposed to listen to their allies, they might perhaps be more inclined to take note of one of their former adversaries, Field Marshall Erwin Rommel. "The Americans," he said, "it is fair to say, profited far more than the British from their experience in Africa, thus confirming that education is easier than re-education."

Often the greatest barrier to learning is the conviction that the subject is already known, and that there is nothing new to learn – especially if the source of that learning is believed to be inferior. The Americans may have – and indeed have – got things wrong, but they have also shown that they are capable of learning from their mistakes. That same ability is not always evident in the British ranks.

In this, perhaps, the British would be better off with the EU. Being rude about the French and Italians comes much more naturally - and their insults are more readily ignored.