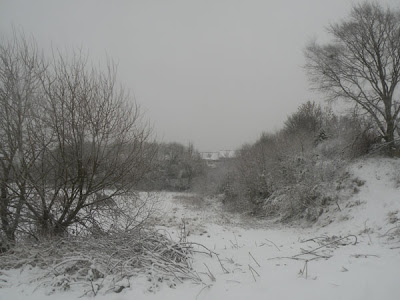 This is the scene this morning … the third snowfall so far this winter, and the worst early December snows in living memory.

Of course, it's only happening in Yorkshire and the North, so, despite it causing absolute chaos it isn't really happening at all. From his nice warm studio in London, Jon Humphries was thus able cheerily to dismiss the "weather" with the quick one-liner, "There's been some snow, but it will clear later" - the classic "London-centric" view.

The point is that, not only is this unprecedented, we predicted it – based on our own personal "climate model". For all the zillions spent on the official models though, none of them did – and neither are the "warmists" at all keen to draw attention to the current state of the Arctic sea ice (below) which is well ahead of last year. 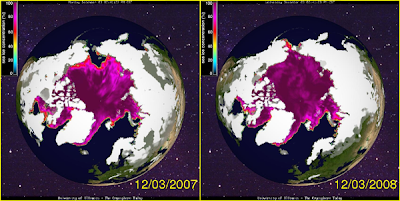 We have charted the emergence of what is quite clearly a global cooling trend on this blog (google "snow" on our dedicated search engine, top-left) and also noted how the "warmist" twitterers have been banging on about ski resorts going out of business because of the lack of snow (they are enjoying a record early season) and the "green Christmas" with the leaves still on the trees because of global warming.

With the Climate Act, as we must now call it, on the statute book, history will doubtless show this to be one of the greatest acts of folly ever perpetrated by our legislators, and another example of the great "disconnect" between our political classes and the rest of the nation.

Out and about this morning, taking photographs of our new ice age (more on EU Ref 2 here), I exchanged merry words with a lady who was taking her dog out for a walk. One mention of "global warming" had her exploding into derision, storming: "They do talk a load of rubbish, don't they!"

This is indeed another sign of that "disconnect" that even Prof King noticed, something which the denizens of the Westminster bubble can't even begin to take on board. They're losing it - to say nothing of the "colleagues" - and they haven't even begun to understand why.