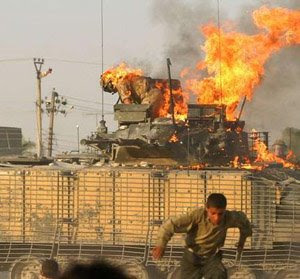 Carried in The Independent yesterday and reinforced in The Times today is the final template for the final withdrawal of British forces from Iraq.

The Independent puts is bluntly, telling us that the departure is enforced, with Iraqi prime minister, Nouri al-Maliki, taking his revenge for what he regards as the British surrender of Basra to hardline Shia Muslim militias. By this means, British forces in Iraq are facing a humiliating end to their six-year mission in the country.

What brings this about is the expiry of the current UN mandate on 31 December, leaving Britain without a legal framework for its continued presence after that date. The Independent had it that "frantic diplomatic efforts" were under way to secure an extension.

The situation was described as "extremely serious" and it is this which is behind the government's announcement last week that Britain's 4,100 troops in Iraq would begin withdrawing in March, and leave completely by the end of June - apart from 400 troops in training and mentoring roles.

At the time this story was published, the situation had not been clarified with a senior figure saying that it was "quite possible" that no agreement past the end of December would be ratified, in which case British troops would have to start pulling out immediately as they would have no legal basis for remaining.

In The Times, however, there is added detail. Still heralding Britain facing a "humiliating Iraq withdrawal", the story is there that British forces are now to be required to leave by the end of next July.

The worst of it is that Britain has been lumped in with five smaller contingents, including those of Romania, El Salvador and Estonia, and included in a "mini-agreement for the six entities", separate from the main agreement which has US forces leaving within three years. The other "entities" have been given until May to cease duties and then a period of two months’ grace to get out by July 31.

Britain had hoped for a separate deal, along the lines negotiated with the US but Fawzi Hariri, the Iraqi Industry Minister, says: "There was no way we could have done a security agreement to the same level of detail that we had with the Americans in such a short period." Thus we have been lumped in with Estonia and the rest.

The Times also rehearses the background, telling us that the Iraqi Prime Minister's discontent boiled over last spring. Having done a deal with armed groups to leave Basra Palace, their last sizeable outpost within Iraq's second city, in the summer of 2007, British forces remained largely confined to the airport.

General Sir Richard Dannatt, argued that Britain's troops were the main target of attacks, and that their withdrawal had led to a reduction in violence, but in the Iraqi Prime Minister's view, Basra was simply abandoned to warring militias. He launched a successful Iraqi military operation, supported by US forces and dubbed "Charge of the Knights", to seize the city in March, with British troops taking only a small and belated part.

The senior source said a bilateral agreement on the future status of British forces had "supposedly ... been about to happen for months and months", adding: "We should not forget how angry – and mistrustful of the British – Maliki is for allowing the Shia militias to take over in Basra. He regards the British as having entirely sold the pass. It is true that it suits him, for domestic political reasons, to be seen to be giving the British a hard time, but it happens to be something he feels very cross about."

In truth, Maliki has every right to be "cross". The British retreat actually started right at the beginning in May 2003 when the government decided to opt out of running a southern Iraq devoid of government, and progressively handed over the running of the region to the militias.

The turning point came in August 2006 when the Army quit al Amarah, leaving it to the Mahdi Army, under which control it has remained until last June, becoming the weapons "depot" which supplied the rest of the Shi'a insurgency in Iraq. It was only in June that 20,000 Iraqi troops, backed by 2,500 elite US troops, finally moved back in to impose, for the first time since the invasion, the writ of the Baghdad government.

The full story has yet to be told (although it is in the process of being written) but this final humiliating chapter sets the seal on what has in reality been a comprehensive defeat for the British Army. The blame, however, lies mainly with the government, from Blair through to Brown. Nevertheless, the Army brass does not exactly come out of this with any glory.

So far, though, the government has sought to "spin" this defeat as a victory – and its has partially got away with it, relying on the Army to support it, in the knowledge that it too will not want to walk away from Iraq admitting its own failures.

Too many people though know exactly what went on and this is too big even for New Labour to "spin". The truth will out, and it is not pretty. But it typifies the utter incompetence of a government more concerned with "spin" than soldier's lives or the welfare of the people whose land it had invaded.

As our troops finally march away, to their ships and aircraft, this will indeed be the final humiliation. This government must not be allowed to get away with pretending otherwise. But the Army also needs to come to terms with its own failures for, without learning the lessons that come with that, it is setting itself up for another, more serious failure in Afghanistan.

As Thomas Harding writes in a superb piece published a few days ago, "if we are to win out in the far more challenging arena of Afghanistan, then the Army had better change, and change soon."