A vacuum at the heart of politics 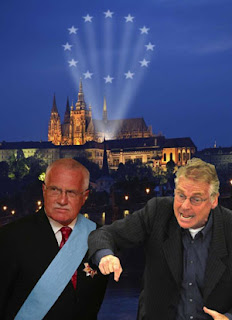 Today in his column, quite rightly, Booker picks up on the confrontation between Václav Klaus and Daniel Cohn-Bendit (amongst others), the transcript of which we published last week.

Booker, of course, takes it further, pointing out that the confrontation in Hradcany Castle confirms "the inability of the Euro-elite to accept anyone else's opinions," and also puts it in context. He writes:

Imagine that a Franco-German MEP, invited to meet the Queen at Buckingham Palace, plonked down in front of her an EU "ring of stars" flag, insisting that she hoist it over the palace alongside the Royal Standard, and then proceeded to address her in a deliberately insulting way. The British people, if news of the incident leaked out, might not be too pleased.

This bizarre confrontation, Booker tells us, has been recounted and discussed with shock across formerly Communist eastern Europe. But not here in the MSM to any great degree until it gets in the column. But, as he says, it does confirm the inability of the Euro-elite to accept that anyone holds different views from their own, on Lisbon, global warming or anything else.

As we see from the way our own political parties are run, when it comes to "Europe", the system has no place for opposition. Everything must be decided by "consensus", directed from the top. There is only one approved "party line". Apart from a few little powerless dissidents round the edges, the EU is thus in essence a one-party state.

It was a sense of this that powerfully influenced the French, Dutch and Irish people, when they were given the chance, to vote against the constitution which will cement that one-party state into place more firmly than ever.

And, concludes Booker, it explains why, last week, the European Council told the Irish that they must hold their referendum again, on the understanding that this time they will get it right. That is the way one-party states behave – as President Klaus, who lived under one for the first 50 years of his life, knows only too well.

We then get Daniel Hannan essentially rehearsing the same theme, who in his own piece writes:

This is becoming like the closing scenes of Terminator. However many times you kill the European Constitution, it keeps lurching to its feet again. Blam! Fifty-five per cent of French voters say "Non". Zap! Sixty-two per cent of Dutch voters say "Nee".

But the automaton keeps advancing, its flesh burned away, its charred metal skeleton stamped with the words "Lisbon Treaty". Then – pow! – 53 percent of Irish voters vote "No". The machine is briefly swallowed by orange flames. Then, after a short lull, the red lights …

In The Sunday Times we get Minette Marrin writing in her own way about the same theme, under the heading: "Betrayal all around from the guardians of democracy." It's an odd coincidence, she notes …

… that while democracy and meritocracy have truly spread in the past 50 years, while all sorts of institutions and activities have been opened up to people who used never to get a look-in, political democracy seems to be coming under increasing threat.

On the intimately linked issue of "climate change" there is Nigel Lawson commenting that, "Climate change summits like Poznan and Brussels will cost us the earth", picking up on the mad "climate change circus" beloved of the "colleagues" which is the very antithesis of our system of parliamentary democracy.

A false note comes from that preening idiot Chris Heaton-Harris MEP, in the letters page of The Sunday Telegraph, writing blithely about the British who "still deserve a vote after Lisbon Treaty's ratification".

Thus he observes that there is "a long-standing convention that no Westminster Parliament may bind a subsequent Parliament," entirely oblivious to the fact that, as we noted, the very essence of our membership of the EU is that that doctrine (not a "convention") goes out the window. In front of the very eyes of Heaton-Harris, we have the "climate change agreement" which binds successive parliaments to 2020 and beyond, one of many things emanating from the EU which does likewise.

But the ultimate false note comes from Matthew d'Ancona, who fixes on the current Conservative policy – this on the recession – which as he tells us amounts to the view that "David Cameron can't do anything about recession but must say the right things."

The problem here is that David Cameron's broader view of the more intractable and long-standing problem of the erosion of our democracy is that "saying the right things" actually amounts to saying nothing at all.

In the welter of comment about the way the EU is running rough-shod over our ancient rights, about how it is tearing the economy apart with its obsession on climate change, and how it is making a mockery of the Irish "no" decision by demanding another referendum, there is no political – or any – input from the Conservative party. The Conservatives are simply not part of the debate.

Whether they like it or not, the role of an opposition party is to drive the debate on politics, to explore issues and concerns that the government does not want to talk about. Central to that debate is the way we are governed, and the increasing encroachment of that "one party state" that is the EU.

If the Conservatives refuse – as they are doing – to take part in that debate, then it leaves a vacuum at the heart of politics. And, as we all know, nature abhors a vacuum. The Tory absence is being filled and will be filled by others, leaving the party even more marginalised and irrelevant than it is already.

Their silence is more damaging than they can even begin to imagine.