How Long Before We See Eco-Terrorism? 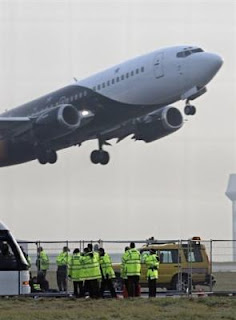 Today's news that Stansted airport, the third largest in Britain, had been shut down for five hours by a group of "climate activists" provides yet further evidence that we are faced by a dramatic new escalation in the battle over "global warming".

More than 50 flights were cancelled and thousands of dismayed passengers milled about in chaos and confusion, as the protestors, under a banner reading "Climate Emergency", blocked off a runway with metal barriers and padlocked themselves to fences.

Although the police eventually arrested 57 people on various criminal charges, what was significant was that the young demonstrators, most between 18 and 23, declared that they were so "terrified" by the threat of global warming that they were quite prepared to break the law in support of their demands that the government must take much more immediate and drastic action to "save the planet".

This was precisely the kind of thing we were warned of three months ago after a landmark case involving another group of "climate activists" charged with causing criminal damage to a power station in Kent.

The six Greenpeace members who had invaded the ageing Kingsnorth coal-fired power station to protest against plans to build a new power plant on the site argued that they were only committing their criminal acts to draw attention to the far greater "crime" of global warming.

Their case became an international cause celebre when their chief witness was Dr James Hansen, head of NASA's Goddard Institute for Space Studies, the scientist who more than any other, with his friend and ally Al Gore, first set the worldwide panic over global warming on its way 20 years ago.

So fanatical is Dr Hansen in his belief that global warming is threatening the world with extinction that he has recently been campaigning to see every coal-fired power station in the world closed down.

Outside the court, a spokesman for the protestors warned that this bizarre judgment, seemingly giving the green light for "climate activists" to commit criminal acts to further their cause, was only a start. Many more such actions would follow, as today's chaos at Stansted confirmed.

Not the least remarkable feature of Dr Hansen's willingness to fly across the Atlantic to appear in a British court on behalf of people accused of criminal acts was that he was doing so as a senior employee of the US government.

Furthermore it was reported that, before travelling down to Maidstone, he had a meeting with the British Foreign Secretary David Miliband, himself a passionate believer in the threat of global warming.

It was David Miliband, in his previous role as environment secretary, who ordered that copies of Al Gore's highly controversial propaganda film An Inconvenient Truth should be issued to every school – and it is now his brother Ed Miliband, as fanatical about global warming as himself, who has been appointed as Brtain's first Secretary of State for "Energy and Climate Change".

We thus have key senior ministers seemingly so sympathetic to the general aims of the "climate activists" that it would be hard to distinguish between them.

It was Ed Miliband, for instance, who recently put on the statute book the government's new Climate Change Act, the most ambitious piece of legislation on this issue anywhere in the world, committing Britain by law to reduce its carbon dioxide emissions by a staggering 80 percent in just 40 years.

As many experts privately observe, it is hard to imagine how this could possibly be done without closing down most of Britain's economy. It is potentially the most expensive law ever put through Parliament – yet our MPs of all parties approved it by such an overwhelming majority that only five voted against it.

Such is the power of this issue to arouse passion, however, that. even though our politicians, ministers and the EU now seem unanimously committed to the cause of "combating climate change", for the environmental activists themselves this is nothing like enough.

When the US President-elect Barack Obama recently pledged himself to a set of policies on global warming almost as extreme as those now adopted by the British government, our leading journalistic champion of the more extreme environmentalist cause, the Guardian's columnist George Monbiot, pronounced that, although such measures might have been welcome a few years back, the crisis now facing the world is now so desperate that they are no longer "relevant".

The "Great Moonbat",as he known in more sceptical circles, came up with his own "six point plan" for saving the planet, which included cutting back on air travel by 95 percent and imposing such "stonking" taxes on any industry which emits CO2 that most of what remains of our industry – including our power companies - would be unable to survive.

The awful fact is that belief in the threat of global warming has become like a fanatical religion, egging on its believers to vie with each other in becoming ever more hysterical and extreme in their demands.

Nothing should alarm us more in this respect than the newfound conviction of its adherents – as we saw again at Stansted today - that their cause is of such all-transcending importance that to further it can justify breaking the criminal law.

Even more alarming was that Maidstone verdict showing that the courts of the land are now willing to uphold the campaigners’ belief that they are above the law – that the cause of "saving the planet" overrides everything else.

Once we begin to travel down that path, where does it end? The late Michael Crichton, the best-selling science-fiction writer who was a considerable sceptic on global warming, wrote a novel a few years back, State of Fear, predicting that environmental fanatics would become so carried away by their cause that they would eventually resort to acts of organised terrorism to promote it.

Some, including James Hansen, have already suggested that those who dare encourage "denial" of global warming, such as the chief executives of power companies, should eventually face trial for their "high crimes".

Reading the comments of those responsible for today's closure of a major airport, costing millions of pounds, we do seem to be inching ever nearer to the day when "saving the planet" from global warming might seem in some eyes to justify even more destructive and violent acts of "eco-terrorism".

At least it may be some faint consolation to know that, from the Alps to North America, recent days and weeks have seen some of the heaviest snowfalls for decades. As plummeting global temperatures continue to defy the predictions of all those computer models on which our politicians base their policies, is it is just possible that nature could release us from this madness before it is too late?