The madness of our age 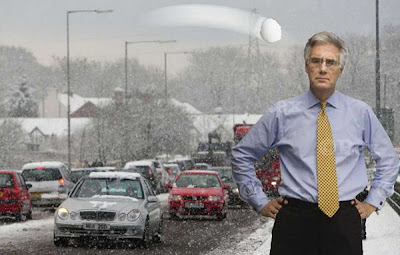 In his column today, Booker takes on the recently published Turner report, full frontal, under the apposite headline: "Blizzard of mad proposals descends on UK."

Published last week, the report is the first formal production of the government's Committee on Climate Change, chaired by Lord Turner of Ecchinswell, a committee that was appointed in February to give "expert advice on how the UK can best meet its climate change goals."

Its full title is "Building a low-carbon economy – the UK's contribution to tackling climate change", and it is available online as a .PDF document running to 511 pages.

That Booker is one of the few journalists to deal with it is critical terms is depressing enough but what is uniquely depressing is that he – or anyone else - should have to expend any energy at all in so doing.

As he points out so lucidly, in the limited space he has, the report is a catalogue of the most unremitting tosh, page after page of the most unrealistic, unscientific wishful thinking that does not have the remotest chance of coming to fruition.

In a sane world, this report would have been killed at birth, long before it got anywhere near the printing presses - and its stock of 75 percent recycled paper. Someone on the lower reaches of government would have taken one look at it and tossed it into the waste-paper bin, then composing a stiff memo to his minister, suggesting that Turner and his committee should be put out to grass.

But we are not in a sane world. In the upper reaches of government, we have Ed Miliband, a secretary of state of such dismally low intellect that recently "power industry chiefs" took the unprecedented step of ganging up and telling The Times that the man did not understand his job. Yet, this is the man at the receiving end of the Turner report. He, fool that he is, will take it seriously and use it as the basis of policy decisions which will drive us into perdition.

Interestingly, in The Sunday Telegraph today, we have another piece which addresses the "wind power targets" and the claims by the Turner committee that wind power can supply a third of Britain's electricity. These, we are told, "have been condemned as wildly optimistic by leading experts."

Actually, they are not "wildly optimistic". They are barking mad, so way beyond any possibility of achievement that their inclusion transcends mere myopia and stupidity and descends into the realms of lunacy. Yet – by government and so many others – they are being taken seriously, as if they were the production of sane, rational human beings.

The huge problem, though, is that despite the Turner report being a policy document created by blind technocrats, it will be adopted without input from the political classes. There will, for instance, be no debate in parliament on the report and, even if there was, it would be a low-grade, lacklustre affair as the main political parties have bought into the "climate change" miasma and argue only over detail rather than substance.

So it is that the debate lies outside the realm of formal politics, witnessed by Booker's columns on the issue routinely occupying the top slot on the "most viewed" section of his newspaper.

Herein is a classic example. The madness that is the Turner report touches us all – it will cost us a great deal in so many ways. Yet the politicians are silent. While tomorrow they will be expending their energies on a debate on the "Green affair", they are not interested in dealing with an issue which is of far more direct importance to all of us.

When they change their minds, and start to deal with this issue seriously, perhaps we will change ours.

(As for the photograph, illustrated is the original concept, with the snowball winging its way towards Turner. I would have preferred the snowball to have been replaced with a brick, or - preferably - a grenade. In the event, our wise and sober-minded editor decided to omit any type of projectile.)