Brothers under the skin 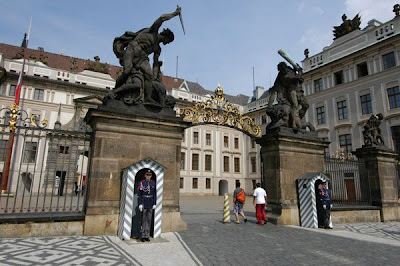 You would not have thought that Nicolas Sarkozy had much in common with Dany Cohn-Bendit but it seems the French president has sided with Dany the Red after he demanded that Václav Klaus should fly an EU flag over Hradcany Castle (pictured).

Recorded nearly two weeks ago on this blog, and then by Booker, Bruno Waterfield now records that Sarkozy has sparked a diplomatic row by attacking the "wounding and outrageous" refusal of the Czech president to fly the accursed ring of stars.

"It was a wound, it was an outrage to see that flags had been taken down from public buildings," says Sarkozy, stating that "Mr Pöttering" – who was part of the plot to bounce Klaus – "can count on the full support of the French president."

Czech foreign minister, Karel Schwarzenberg, however, has hit back, declaring: "There is no law binding the Czech Republic to hang the EU flag over Prague Castle. Prague Castle is a symbol of the Czech state and not the EU."

Schwarzenberg adds: "It is not up to the head of another state to criticise the Czech president over flags," pointing out that even if a major part of the population and EU representatives wanted the flag to be hoisted at Prague Castle, it was only up to the president to decide on whether to do it.

Then, a statement from the office of Mr Klaus put the whole thing to bed, saying: "The Castle is a symbol of Czech statehood. There is no reason to change this historic tradition."

In siding with Cohn-Bendit, however, Sarkozy may have been misled as to what transpired by an article in Le Monde, which gave a highly skewed account of the meeting, describing Klaus as "l'ultralibéral, colérique et europhobe président".

This may explain Sarkozy's further comments where, with reference to what he imagines was said at the meeting, he states: "This is not the way one negotiates with the members of the EU parliament, regardless of what is one's political involvement. This is not the way the symbols of the EU should be treated."

However, we will all be pleased to know that, "Le petit drapeau européen est resté sur la table du président tchèque. Sans trop d'audace spéculative, on peut supposer qu'il ne s'y trouve plus." By now, on suppose that le drapeau is stuffed somewhere where the sun does not shine.