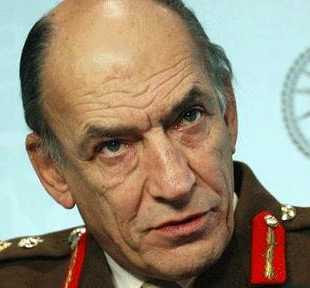 One has to suppress a wry smile and at least admire the speed with which General Sir Mike Jackson has got his knife in first, before the many knives are directed at his broad but inadequate back.

The man is writing in The Sunday Telegraph today about the impending departure of British forces from Iraq, telling us that the withdrawal "represents a most significant achievement after what will have been a very difficult and challenging six years."

He thus tells us that Britain’s Armed Forces "will leave Iraq with heads held high" and that they "should be proud of their efforts".

That is fair enough, applied on an individual and unit level, where the courage, tenacity, skill, dedication – and suffering – of our troops (and airmen and sailors) is to be applauded, unreservedly. They did what they could, and many did more than we had any right to expect of them.

However, we – and they – should not run away with the idea that the campaign was a success. At best, we could describe it as an "heroic failure". Our armed forces were under-resourced, undermanned and ill-equipped from the very start, given a job that they could not hope to achieve. And thus, predictably – but with no reflection on those at the cutting edge – they failed.

In the end, after abandoning the outer provinces, with their ignominious retreat from al Ahamrah, forced on them by the pitifully inadequate resources allocated to the Maysan Battle Groups – they were driven out of all but one of their bases in Basra, until they were hunkered down in the former Basra airport, out of the game.

It took Iraqi troops, with the support of the US – including its massive air power – to recover Basra from the Mahdi Army and it was not until June that they did likewise with al Amarah.

These points we have made before, but you will not hear Mike Jackson make them. To him, in his piece today, anything that went wrong was the fault of the Americans, or anyone else but Mike Jackson.

Initially, it was all the fault of the Iraqis, whose "expectations of immediate economic improvement were understandably but unrealistically high." Their frustration at not seeing this realised quickly turned to anger with the Coalition forces.

Then, this volatile situation was "much exacerbated by the security vacuum created by Washington's appalling decisions to disband the Iraqi security forces and to de-Baathify the public administration to a very low level; the latter marginalised the very people who were best placed to help."

These decisions, asserts Jackson, "may well have doubled the time it has taken to get to where we are now." Then there was the Iranian backing for Shi'a "militants", which was a further difficult complication. And there was also "the lack of a coherent reconstruction plan and the failure in Coalition capitals to understand fully the complexity of the situation."

All this may be true, and no one will disagree that the Americans made some appalling mistakes. But so did the British. Immediately after the invasion, they failed to recognise that a Shi'a insurgency was building up round them, initially attributing attacks to Saddam loyalists and the remnants of his forces. Instead of taking on the militias, they gave ground to them, made deals with them, and then eventually handed southern Iraq to them on a plate.

Much of that was entirely the responsibility of the politicians, and Tony Blair in particular, who lacked the courage, in the face of the growing unpopularity of the war, to commit the resources and the men to do the job properly. Instead, his "spin" machine went into high gear, painting a wholly false picture of a "success" that was belied by the fact that the security situation was getting worse, and worse and worse.

But nowhere do I see any evidence at all that Mike Jackson, who was professional head of the Army until August 2006, had a grip on the campaign, knew what was needed or sought to ensure that the Army was properly equipped for the campaign. It was, after all, Jackson who authorised the sending of Snatch Land Rovers to Iraq and it was he who kept them there, long after it was abundantly clear that they could not do the job required of them.

Thus, while the Americans may have made all the mistakes in the book, they learned from their experiences, adapted and then prevailed. That the British Army came out of the campaign with much the same equipment with which they started, and recognisably similar tactics, says a great deal. Despite the courage and dedication at the cutting face, the high command failed to adapt, failed to meld the Army into an effective counter-insurgency force, and failed ultimately to provide the leadership that the Army needed.

Interestingly, Jackson observes that the period in Iraq has "been a long, hard and controversial campaign, but I believe it has largely succeeded." He is right in all respects, but the success is not his, or that of the British Army. Our forces rose to the challenge, writes the man, but the leadership – both military and political – did not.

And to the end, like his former political master, Jackson is "spinning". He writes of "the announcement that Britain is largely to close down its military role in Iraq by May 31, 2009," not acknowledging that the date is not one of our choice. It has been set not by Mr Brown, but the Iraqis. They have kicked us out.

Even then, that date might not be the final word. When Gordon Brown so confidently announced it last week, he forgot to tell the world that this was a provisional agreement, subject to ratification by the Iraqi parliament. Without its agreement, our mandate ceases at midnight on 31 December, after which we are required to leave.

But the Iraqi parliament has not agreed. Yesterday, it threw out the draft law which would have permitted the extension of our stay to 31 May – by a massive 80 votes to 68.

Another vote is due next week but there is a strong caucus in the parliament which want to see the back of the British. Not least is Nasser al-Issawi, an MP loyal to Muqtada Sadr. He has hailed the rejection of the draft as a "great national achievement", and said he hoped the foreign troops would be forced to leave when the UN mandate ends.

If the parliament finally rejects the law, it will be up to Nouri Maliki to save our blushes by exercising his executive powers and signing individual agreements directly with each of the foreign states with troops remaining, giving them – and us - a legal basis to remain. This would be a messy solution, but rather appropriate for a messy war.

Soon enough, much of that mess – or the reasons for it – will emerge. And General Mike Jackson will not come out so well from its evaluation. It was just as well he got in first. He needed to.