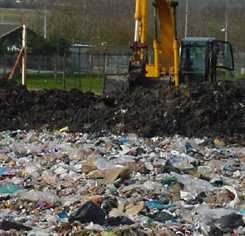 N G McCrum (what a delightful name), an Emeritus Fellow in Engineering at Hertford College, Oxford, has a lesson for us in the letters column of The Daily Telegraph. It has far wider implications than the subject matter would indicate.

His primary concern is to take Liz Goodwin to task. She is the chief executive of the Waste and Resources Action Programme and McCrumb's complaint is that, in her response to an article about the partial collapse of the recycling programme in the UK, she confused the term "recycled" with "sorted for recycling".

The context was her words, "10 million tons of waste were recycled in Britain last year" but, as McCrumb points out, "This does not mean 10 million tons were recycled." Householders, he reminds us, "have become aware that very little of what they put out for recycling is in fact recycled."

Dr Goodwin, McCrumb thereby asserts, "evades the truth, that the recycling programme has come off the rails. Plastics, paper, etc cannot find a market and are now to be stored at public expense until the price recovers, if ever."

This is precisely the issue over which we took Jane Kennedy, the "Environment Minister" to task. She too had fallen prey to the same disease of sloppy thinking, equating "recycled" with "sorted for recycling".

And, as The Daily Telegraph again reminds us today, these are increasingly not the same thing. "Hundreds of thousands of tons of unwanted recycling, it tells us, is (are?) being stockpiled as contractors struggle to sell off used cans, newspapers and cardboard collected from households."

This sort of "terminological inexactitude" poisons public discourse and allows politicians like Kennedy and lesser mortals like Goodwin to get way with sloppy thinking and sloppy government.

If we had exact figures for how much waste was actually, genuinely recycled, there would doubtless be a wholly different dimension to the public debate. One can imagine that there would certainly be more political traction in the issue if we all realised quite how much we were spending on this madcap venture, and how little material was actually taken out of the waste stream.

The media, of course, add to the confusion. Today's Independent gives space to the government-funded Waste and Resources Action Programme (Wrap), allowing Andy Dawe, Wrap's "head of retail" to burble that, "It is vitally important that we carry on recycling." Says Dawe: "If we stop, all materials will go to landfill – and that is the worst possible outcome."

This same paper then trots out the same tired, discredited statistics, so beloved of Mz Kennedy. In 2007, we are told, "the UK recycled 9.7 million tons of household waste, an increase of 10 percent on the previous year." No it didn't, we shriek. This is a lie.