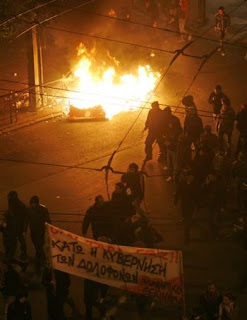 In the third day of riots in Greece, the unrest – which started in Athens - has spread to the central cities of Larissa, Trikala, as well as in Corinth to the west of Athens, Piraeus, Corfu and the northern town of Veria. Now, Deutsche Welle is reporting that the violence is set to continue.

Damage so far is estimated at €100 million, and rising, with more than 130 shops in central Athens having been torched and looted.

Needless to say, the Greek government is anxious to project the disturbances as "vandalism", strongly emphasising the youth element and "self-styled anarchists". This line is very much reflected in an AP report which has prime minister Costas Karamanlis casting himself in the role of the upstanding supporter of law and order, declaring, "The state will protect society."

However, while the riots first erupted across the country last Saturday after a 15-year-old youth, Alexandros Grigoropoulos, was fatally shot by a police officer in Athens, the sheer scale of the rioting, and its duration suggests something more than a simple reaction to the shooting.

Not least, there seems to be a reaction to a brutal police force, which is regarded as out of control, having been involved in a number of unexplained violent incidents where deaths have occurred. That two police officers have been arrested and one has been charged with murder in relation to this incident indicates that something very sinister is going on.

Certainly, The Daily Telegraph is directly reporting that the shooting has been but a catalyst for the violence. It comes against a background of high youth unemployment, the rising cost of living, stalled pension reform and a widening gap between rich and poor.

Furthermore, the centre-right government, with a wafer thin majority of one, is massively unpopular. Not least, it stands accused of doing little to help low-income Greeks who are in the grip of the current financial crisis, while at the same time pumping €28 billion into a support package for national banks. Many of these are privately owned, associated with multi-millionaires in a society which is riddled with corruption.

There also, according to a letter in The Scotsman, seems to be a strong immigration element to the riots, the correspondent referring to earlier PA reports, the day before the shooting.

These indicated that the riots were the direct result of asylum seekers being told there would be no further residential applications for the week. "Hundreds of migrants waiting to submit asylum applications rioted in central Athens, setting fire to rubbish bins and attacking passing cars," it said. Twenty years ago, Greece had no visible immigrant community. In 2008, one out of every ten residents in Greece is foreign-born.

Buried in all this, unmentioned by media reports, is a broader resentment that the governing élite has lost touch with its electorate, being tucked up with EU "colleagues" and unresponsive to national priorities and needs.

Reuters is reporting that, with the funeral of the shot youth taking place today, violence is sure to continue. And, although currently denying reports, the government is meeting today with party political leaders to consider the declaration of a state of emergency.

Altogether, we seem to be looking at a deeply disturbed, dysfunctional society, with a government that is losing control. And, while Greece has perhaps a more recent history of major violence than the UK, there are enough factors between this troubled country and the UK that it would be rather unwise to suggest that something similar could not happen here.