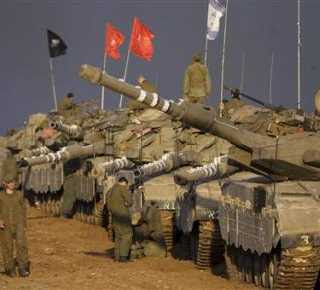 Having learnt absolutely nothing from its experience of the Lebanon war of 2006 – where it pushed for a premature cease-fire thus letting Hezbollah off the hook after it murderous rampage – the EU is repeating exactly the same mistakes.

Wedded to its idea of soft (as marshmellow) power, again its is leading the ranks of appeasers, calling for Israeli "restraint" and putting its efforts into brokering a rapid cease-fire. However, as did Hezbolla manipulate world opinion over its staging of the Qana "rescue", Hamas is proving adept at the same tricks, no doubt paving the way for a cease-fire at a time of its own choice, aided and abetted by the gullible "international community", with the EU in the forefront.

To that effect, the "colleagues" have rushed to arrange a meeting for today of the foreign ministers of the European Union, where they will plan how to maximise pressure on Israel to ease the pressure on Hamas and let it off the hook.

As always, the colleagues cloak their mad statements in the language of reason, declaring that, "The ministers will look into how the European Union can help ease the current crisis, along with the efforts of the international community, especially the secretary general of the United Nations." Tranzie shall speak unto tranzie, and the UN is right up there with the EU.

The meeting is set to take place at 5.30 pm, and will be chaired by French foreign minister Bernard Kouchner, with the "usual suspect" Javier Solana in attendance. Although, ostensibly, it is none of their business, other members of the EU commission are also expected to attend.

And, instead of letting Hamas rot, the colleagues are planning to "increase humanitarian aid to Gaza," heedless of the fact that, had this murderous organisation not bombarded Israel with rockets and mortars, and instead expended its energies on running Gaza, it would not need such aid.

As an example of how utterly warped "European" thinking on this issue is, though, we must go to Deutsche Welle which offers house room to Jochen Hippler, a German "expert" on the Middle East, based at the University of Duisburg-Essen's Institute for Development and Peace (INEF).

He offers a thesis that the European Union "bears some of the blame" for the situation in Gaza - what could be a welcome refrain. He spoils it though by telling us that the EU has not wielded the political clout of the United States but now needs to step up to the plate when it comes to "negotiating a workable initiative for peace."

"Europe (he means the EU) has made a couple of mistakes in the last couple of years," he says. "Instead of respecting the elections (that brought Hamas to power) and dealing with someone they don't like, they've helped to trigger a kind of civil war among Palestinians. And you can't have peace with an opponent that is at war with itself." Really?

The EU, he adds, could resolve help to reduce tensions by bringing Hamas to the table. "We have seen examples where negotiating with Hamas has been successful. But to achieve a ceasefire, the only way is to agree to a mutual ceasefire."

Thus we have the EU in a nutshell. Churchill once said, "jaw-jaw is better than war-war", but then he had just finished a war against Nazi Germany and crushed it into the ground. There is, he would have readily conceded, a time for jaw, and a time for war.

For the EU, however, there is only one solution to everything – jaw, more jaw and even more jaw. Thus, in truth, there is only one mistake the EU has ever made – it exists. The world would be a safer place without it. Perhaps, when the Israelis have finished with Gaza, they can roll their tanks into Brussels. Toasted marshmellow sounds quite a nice idea.