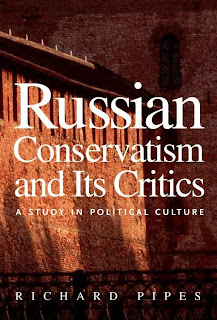 No, it was fine – much time spent with friends, at an exhibition and watching films. We even managed to miss by something like 20 minutes the guy being shot in our street on Christmas Eve. Back to reality.

A few (very few) of the blog's readers may have noticed that my presence on it has recently been erratic and occasionally non-existent. There are various reasons for this and one of my new year's resolutions (well, actually, the only one) will be to make some kind of a decision about it all.

In the meantime, I want to widen the issues we normally discuss. No, I am not going to write about Gaza, that most predictable of developments, except to mention that Hamas is not getting the support of Arab leaders that it is, presumably relying on. (See here, here and here. More on that tomorrow.)

Instead, let me take our readers to a book I have been re-reading in the last week, “Russian Conservatism and Its Critics” by Professor Richard Pipes, probably the best living historian of Russia and the Soviet Union.

In chapter 3, "The Onset of the Conservative-Liberal Controversy", Professor Pipes discusses the inconsistency with which eighteenth century Russian rulers approached the whole subject of public opinion and the amount of freedom it should have. He quotes A. M. Skabichevskii who published in 1892 a history of Russian censorship from 1700 to 1862 (when Alexander II introduced serious political and judicial reforms).

In governmental circles of that time there predominated people brought up in the spirit of old times who simply could not accustom themselves that in society there should emerge any intellectual movement that was autonomous, independent, and lacking in the slightest official sanction. They were accustomed that every undertaking in the intellectual sphere – whether the publication of some periodical or book, or the founding of some educational institution – all this was done not only with the sanction of the authorities but by the authorities themselves, and the entrepreneur, if not previously in the service, by virtue of this very enterprise turned into an official.

Setting aside the argument about people brought up in the spirit of old times, this is a pithy analysis of our rulers and controllers, whether in Brussels or London.

We have remarked on numerous occasions the propensity for assuming that "civil society" is a number of organizations set up by the Commission; of a similar propensity to assume that accountability means discussing proposed legislation with carefully selected organizations and self-appointed "representatives"; of the notion that entrepreneurship consists of obeying a set of rules set up by the government, be that the Commission or the DTI; of the assumption that education and cultural activity cannot exist without some kind of guidance from above.

The point is that this sort of belief is completely genuine. The ever-growing army of regulators at all levels cannot imagine that anything can possibly exist outside their rules and decisions. And then they wonder why European countries are floundering economically, scientifically and culturally.

The most terrible aspect of it all is that this attitude should be acceptable in Britain, the country that, in the eighteenth and nineteenth centuries was the ideal of private enterprise at all levels for those unfortunate countries that did not know how they would achieve that state of affairs. Instead, we have lost what we had. And yes, we did it ourselves. For once, Dr Heinz Kiosk,s famous comment of "we are all guilty" is actually accurate.
Posted by Helen at 22:53