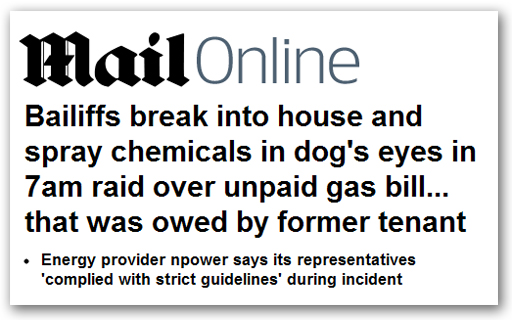 Not a few have drawn my attention to this story the Daily Fail, picking up a report originally in The Sunday Mirror.

Ostensibly about "bailiffs" forcing entry to replace a meter after an alleged unpaid bill, it is unlikely that bailiffs were in fact involved. When armed with a warrant, the legislation permits a supplier to authorise "any officer or other person" to enter premises for the purpose. Suppliers rarely use bailiffs, more commonly relying on specialist contracting firms.

With this and other questions, there are enough dubious aspects to the report to caution against uncritical acceptance of the details but, on the face of it, these "bailiffs" seem to have run roughshod through any guidelines and even the law. Not least, two days notice should be given before a meter replacement.

Amongst the most chilling aspects of the report therefore, is the response of the supplier, Npower. It asserts that: "We will only ever visit a property under these circumstances when all other options have been exhausted - and all personnel on site adhere to strict guidelines and we feel they were fully complied with in this instance".

If the story we read is in the least bit accurate, the Npower assertion simply cannot be true. They cannot have complied with their guidelines. In fact, so distant from any form of reality might be the assertion that one wonders how on earth the company could even think of making it.

And here might in fact be the bigger story. What we could have here is the classic "corporate" which is quite incapable of responding to a complaint or incident with anything other than corporate boiler-plate. They cannot respond otherwise because they cannot see anything of the world outside their own bubble.

This we have noticed with the other corporates, such as the police forces and local councils. Everything is reduced to tick-boxes and procedures, and dredged up a spokesperson to utter the requisite words is simply another part of the procedure.

Corporates do not investigate complaints. Not only do they not know how to, they are fundamentally incapable of recognising their own wrongdoing. Thus, they can't even begin to see the point you are trying to make – the classic dialogue of the deaf.

Thus do we continue to get these absurd and worrying incidents. The behaviour is not the exception but the norm, a symptom of an incurable disease called corporatism.