Wishing doesn't make it so 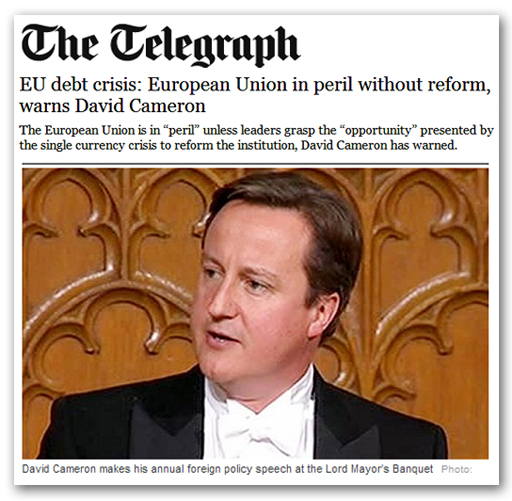 In one sense, one would like to think that our political classes were as duplicitous as we all believed them to be, and not simply as stupid as they undoubtedly are.

Such is the case when we learn yet again – on this occasion via the paywall Times - that The Boy is proclaiming that he will "use the debt crisis to help reshape the way Europe does business". One looks in vain for signs of a devious, if coherent, agenda, instead of the obvious moonshine that is on offer.

The occasion of this latest proclamation is the annual foreign policy address to the Lord Mayor's Banquet, where the man-child tells us that the eurozone's chaos presents an opening for the UK to begin loosening its ties with Brussels. "Change brings opportunities", he says, in what the newspaper calls "striking a self-declared sceptic note".

This is, we are told, is "an opportunity, in Britain’s case, for powers to ebb back instead of flow away" Against a pledge by Merkel to "create political union step by step", Cameron says the EU needs "the flexibility of a network, not the rigidity of a bloc".

In more detail, this brain-deficient doctrine is spelled out in The Failygraph, where he insists that leaving the EU is "not in our national interest" but says he feels "very personally" but that now is the time for a fundamental reconsideration of European relations.

For all the headlines, therefore, nothing has changed – not one whit, iota or jot. The Boy is still pushing the same, tired old "reform" agenda, with no material (or any) changes from yesterday, the day before, or ten years before that. In what passes for the "One Nation" Tory brain, time has frozen. It never moves on.

One singular clue to the fatuity of the Boy is, of course, his very platform - the annual foreign policy address. Like so many, including those in the media, the man-child believes (and hasn't the wit to work out otherwise for himself) that the EU is a matter of foreign rather than policy. He cannot deal with the fact that the EU is part of the government of the United Kingdom – in the areas where it has competence, its supreme government.

Needless to say, therefore, The Boy cannot resist his pathetic and unchanged bleating about a new "relationship", demonstrating that it would be easier to communicate with aliens on Ursa Major than the Tory brain.

But this is all part of the pattern. The corporate entity that is the British establishment has never been able to deal with the fact that there are only two options available to the UK – full integration or complete detachment. And unable to admit that the destination is the former, it continues to pretend to itself that there is a middle way.

It is here that duplicity would be nice. Please God that The Boy understands that the only real option is that we have to quit the EU, but is going through the motions of seeking reform in the knowledge that he will fail and will then be able lead us into the promised land of a once-more independent Britain.

Faced with the impossibility of his headline offer ever coming to pass, there are still those who – despite all experience – believe that Cameron will become that latter-day Moses. The media, for instance, are quite content to play this game.

The sad truth, though, is that there is no duplicity. Our political classes are as stupid as they seem. And bizarrely, Cameron has the nerve to accuse the EU of being "out of touch" with European citizens.