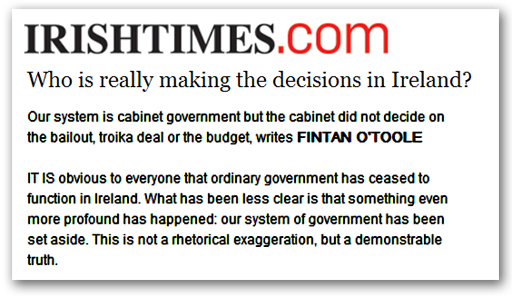 The headline and first paragraph says it all. But is there any politically mature person anywhere in Europe who would not pose the same question of their own country and government?

Meanwhile, in a bizarre display of political naïvety, one sees the Failygraph offer a headline: "Voters should donate 50p to political parties". With the report referring to public money being given to political parties, the word at issue here is "donate". This is about our money being taken from us – forcibly if need be - and given to politicians. How in any sense of the word can "donate" apply to that process? What is the newspaper thinking of?

But even that the political classes are even considering this funding option is a travesty. The answer is "no", a million times "no". No more taxpayers' money for political parties. Too much is taken already.

Thus, what we are seeing is more evidence of the great divide. As they do less and less – and that badly – the political classes want more from us … this entitlement culture that will have them all hanged. I don't think the politicians realise quite how much they are pushing their luck.