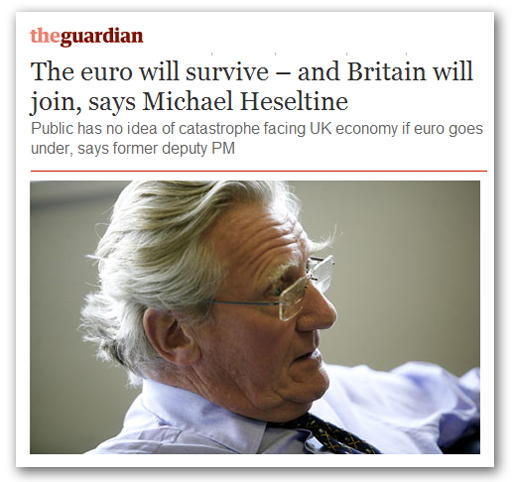 One sometimes wonders whether, if certain politicians pronounced that the moon was made of blue cheese, some newspapers would print it – the news being not the fact but that the statement has been made.

Into that category falls the latest extruded verbal material from Michael Heseltine, who told the BBC on Sunday that the UK will eventually join the euro.

Actually, it is so typical of the BBC to give its favourite child house room to make such an absurd statement. It is all very well the German finance minister, Wolfgang Schauble, making a similar suggestion earlier this week – predicting that the pound is doomed.

But Heseltine will know that, in order to join, there will have to be a referendum and the chances of it delivering a "yes" vote are nil.

This sort of nonsense, though, serves our propagandists and masters well. It acts as a lighting conductor to channel comment and discussion, diverting it away harmlessly, where more focused and intelligent comment might do political damage.

The ease with which people let themselves be distracted is unfortunate, but then the chattering of the crowd rarely has any more significance than the distant hum of motorway traffic on a busy working day. It is just part of the background noise level.

The message thus conveyed is limited and unsubtle and only has any real significance if it stops. That is the case on the rare occasion when one wakes to traffic silence – it tells one there is something amiss.

The only trouble is that this is about all the good the BBC is for. It has neither the wit nor the intelligence to deliver a subtle message, and its people are too ignorant and wrapped in their own bubbles to offer anything of value, which means we end up with noise pollution of the Heseltine variety.

But then, as long as we can hear the distant background drone, it does offer some slight reassurance that the system is still running. But what a dreadful cost for such a slight service.