A dip into the parties 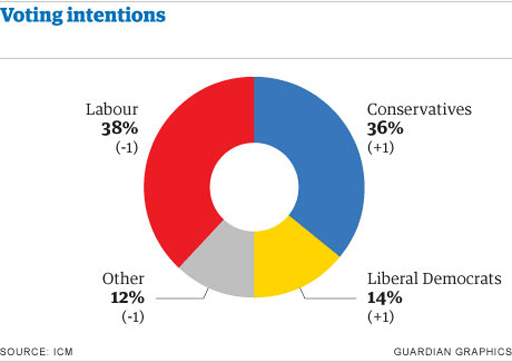 It is a long time since I looked at any party political polls, which is perhaps a reflection of how little the parties seem to matter any more.

In this, The Guardian talks about the Spanish government being largely powerless to influence events, but much the same applies here. MPs in particular, have written themselves out of the script, not least because they so rarely seem to represent the needs or aspirations of their constituents.

Whether any of these figures can be real is debatable for, however loathsome might be The Boy, even he looks a towering figure compared with Ed Miliband. Never in a million years could he convince that he has the makings of a credible prime minister (not that The Boy has yet succeeded, or ever will).

More likely, then, the poll results reflect not so much the fruits of any principled choice as tribal loyalties and a more general indifference to the charms of the candidates. One suspects that, should a credible Labour prime ministerial candidate emerge over the next few years, the electoral calculus could change dramatically.

Of more short-term interest, perhaps, is economic sentiment, with 38 percent of the electorate believing that ministers should concentrate on avoiding the collapse of the euro, with its harmful effect on British trade, while only 32 percent seek to minimise Britain's financial contributions to eurozone bailouts.

But demonstrating their lack of coherence when offered poorly-rehearsed issues, only 25 percent of the electorate, rising to 35 percent of Tory supporters, see a priority as being to reclaim powers from the EU.

Here, either the voters do not believe that repatriation is likely to happen – which would be unsurprising, given The Boy's track record - and/or that the benefits of repatriation have not been spelled out, which is indeed the case.

The Guardian opines that this result "highlights the dangers for Cameron of being seen to divert too much energy into battling Brussels instead of concentrating of the economic dangers of families facing the [economic] pinch".

What it might also highlight is that, even where the political classes raise the temperature of an EU issue, it by no means automatically translates into a measurable electoral advantage in the polls. It could also suggest that, without significant campaigning, the merits of repatriating powers (and in leaving the EU) are not immediately apparent to the electorate.

With only 42 percent of voters reporting confidence in the economy, it would seem that work must be done on linking economic prosperity with departure from the EU (and, possibly, a new political paradigm), before EU issues have a serious impact on electoral politics and we could be sure of a referendum going the right way.