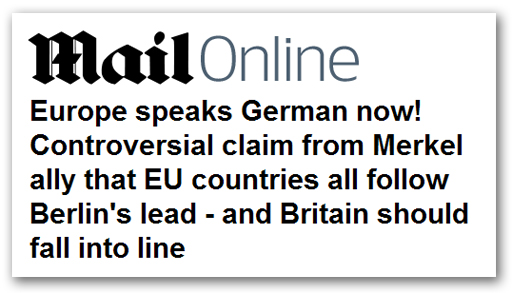 The Daily Mail, stoking up "anti-Hun rhetoric" is never a pretty sight, and one must always remember that it was Rothermere in the 1930s who was cheerleader for appeasement. Perhaps the newspaper is trying to compensate for earlier sins.

However, the current headlining does flag up an unfortunate, if predictable consequence of the financial tensions in the eurozone, and the conflicting national interests amongst the major players within the European Union. Far from becoming an emollient, the continued drive for political integration has become a serious irritant, adding to tensions rather than resolving them.

Even the more considered words of the Financial Times cannot disguise those tensions, this newspaper talking of "German frustration" over Britain's approach to the eurozone crisis, which has "erupted" on Tuesday after a close ally of Angela Merkel accused the UK of selfishness just days before a meeting between the two countries’ leaders in Berlin.

This a speech to members of the Merkel's CDU party, Volker Kauder, its parliamentary leader, who has criticised Britain for opposing the Tobin Tax, declaring that it was "not acceptable" that the UK was "only defending its own interests" rather than that of the wider European Union.

Anti-German sentiment is still only skin-deep in much of British society, and such comments can only inflame the situation, as indeed will the German insistence in pursuing this expensive and damaging tax. The fault lies by no means with the British, references by Kauder to German "being spoken in Europe" amounting to an extraordinarily insensitive statement for a senior German politician.

With Cameron due to meet Merkel in Berlin on Friday, and himself under pressure to deliver more than his usual europlastic rhetoric, it will not take very much for an outbreak of Hun-bashing to break out in the notoriously jingoistic British media, leaving The Boy politically stranded.

That is yet another consequence of the current stresses. Cameron is trailing so far behind domestic sentiment in his continued support for British membership of the EU that he now risks being caught up in a highly damaging war of words that ends up causing irreparable damage.

How ironic it would be if, in his attempt to keep it all stitched together, The Boy actually contributed to making it worse.