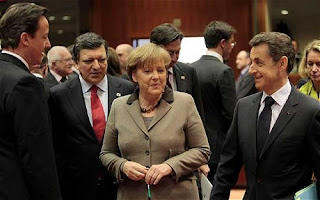 "It’s the question that is gripping – and frightening – Tory backbenchers: does the Government actually have a policy on Europe?" says Iain Martin in the Telegraph.

Of course it does; to do whatever it is told, to say nothing of it and to silence the people who speak against it. But as we speak, the party faithful are tugging their forelocks.

Within their party, there is a great deal of unease about this. Iain Duncan Smith, the Work and Pensions Secretary, and his ally Owen Paterson, the Northern Ireland Secretary, have told the Prime Minister that he really must start applying himself to the issue. For if closer integration among the 17 members of the eurozone does happen, it will mean that the interests of the 10 EU members not in the single currency need to be defended and advanced. If the eurozone collapses, it will necessitate a return to a much looser collection of nation states. Either outcome will require Britain to provide leadership, and offer a strong counterpoint to Germany and France.

Defended and advanced? Our interests were never defended or advanced. It's a little late to start pretending now, and the last thing this needs is the intervention of the Boy. For all the influence this pygmy has, we would be better off sending a scarecrow.

What I take from this is that the Tories haven't realised we have long since been written out of the script. Our opinion was never sought, only our obedience and our wallets, in or out of the Euro. Whichever bag of cement we send to the table, it's game over.

When the Euro does go the way of the pterodactyl, it won't matter what they command because those wooden blocks on the map are just wooden blocks. The bunker is sealed, the cyanide capsules are being handed out and all that remains is to pull the trigger before the mob arrives at the gate.

It is no longer, if ever it was, within their capacity to control. Everything they have thrown at it has been swallowed whole and the beast has asked for seconds. We may as well be firing pea-shooters at a Tiger tank.

If there is a plan B for Europe, there is no dynamism, personal or economic, left in the UK. In all matters but currency we have been the first lemming in the rush over the cliff. It is difficult to think of a single industry we have not voluntarily sabotaged in the name of co-operation or sacrificed on the altar of global warming. Why does Martin think Europe would value the input of one David Cameron? Just because we were not in the bank hall when the robbery occurred does not mean we weren't willing accomplices waiting outside with the engine running.

Furthermore, when the meekrob does hit the fan, Cameron will not last in office long enough to forge "a new Europe". "It is not the job of a British Prime Minister to get foreign leaders to like him." says Martin. Just as well really.