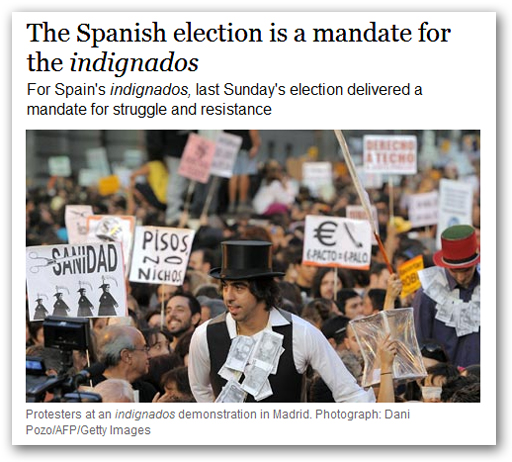 Dislike him as I do, I nevertheless used to have some small respect for Hannan's intellect. But when the man sees the Spanish election as a contest between left-wing and right-wing ideology, you recognise in him a man on autopilot, one who has long since stopped thinking for himself – or at all.

It takes Raedwald to point out that the most interesting contribution on the election comes from The Guardian, with its exposition on the phenomenon known as the indignados.

Adopting a stance which has a ready audience over here, people were writing "ballot box" on drains and toilets, others suggesting cutting out the middlemen and depositing votes directly into bank machines.

What made this different, says The Guardian was that the campaign of ballot spoiling wasn't a subcultural anarchist prank, but a reflection of widespread popular disaffection. A typical sight during the election was a respectable middle-aged man going from one municipal bin to another writing: "Vote here" on the lids.

Slogans such as "They don't represent us" and "They are all the same", adopted by the indignatos, are now mainstream.

It is the complete inability of the likes of Hannan to understand or even recognise this deeper mood which guides him to the belief that we are seeing a standard shift in between the normal left-right paradigm. But the mood for change is indeed much deeper. Standard politics no longer has a grip and the average politician is the object of contempt which is fast becoming universal.

What is especially fascinating is that the indignados are exploring ideas that go far beyond party politics or even changing electoral law, such as participatory budgets, referendums, election recalls and other forms of citizen-initiated legalisation. "The debate is within the movement, aimed at creating new political forms from below.

Of these various ideas, the "participatory budget" has special interest, this being the core of Referism. Control over the money government spends is at the root of power. This Spanish movement clearly understands where power lies, which is more than can be said of some of the so-called thinkers here.

But then, when we have a political culture still dominated by the MSM – and the BBC – and where the likes of Boris Johnson are seen as serious politicians, we still have a huge amount of catching up to do. But at least, the Hannan brand of Uncle Tom politics does not seem to be catching on.

Nevertheless, the complacent and overly compliant British have still much to learn – not least that no one is going to hand them power. They are going to have to take it. How ironic it would be if the Spanish – not known for leading edge thinking in the promotion of democracy – provided the model.

Of one thing for certain, though, is that there is not yet any clear sign that the necessary political thinking is emerging from the political establishment in Britain. But then that was always the last place to look. Change is going to come from without.

And change is now on the menu.