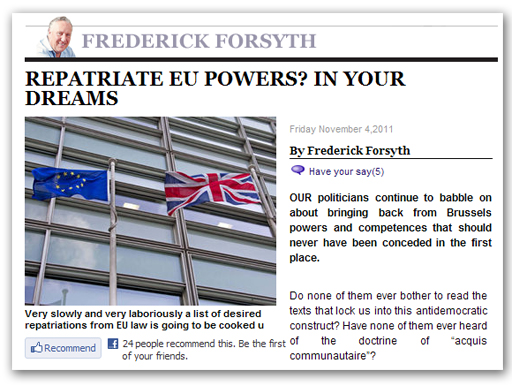 Our politicians continue to babble, says Freddie Forsyth. But he is doing precisely the same in the Express, babbling about something of which he clearly knows little.

On the perfectly correct premise that the Tory ambitions of repatriating EU powers are moonshine, he then goes on to construct an elaborate explanation of why this might be, displaying not only a perilous lack of understanding of the nature of the EU, but also by inventing a non-existent "doctrine".

According to the Great Forsyth, there is a doctrine of the acquis communautaire. This doctrine, he pronounces, is at the very heart and core of the EU. It supposedly specifies in absolutely clear terms that no power, once conceded by the nation state to the EU government in Brussels, can ever under any circumstances be returned.

Having thus misinformed himself, Forsyth demands haughtily of politicians that they should have heard of his "doctrine". Ironically though, they could hardly do so. It does not exist as a doctrine, per se.

For sure, there is such a thing as the acquis communautaire. This, according to definition is the:


… cumulative body of European Community laws, comprising the EC's objectives, substantive rules, policies and, in particular, the primary and secondary legislation and case law – all of which form part of the legal order of the European Union (EU). This includes all the treaties, regulations and directives passed by the European institutions, as well as judgements laid down by the European Court of Justice.

The acquis, therefore, is not a doctrine. It a body of law, etc., which arises from and is part of the European Union. What Forsyth is referring to is something else, something completely different – the EU commission's monopoly right of initiative, the doctrine that states that only the commission may propose new laws.

Since it takes a new law to repeal an existing law – only the commission has the power to dismantle that part of the acquis which comprises its primary and secondary legislation. And since the commission is cast as the Guardian of the Treaties, the objective of which is ever closer union, it will not do that in such a way as to reduce the acquis. That is another doctrine.

However, when it comes to the repatriation of powers, all this is totally irrelevant. For this to happen, it is not to the commission that the politicians must look, but to the treaties. These are matters for the member states. If they so decided, they could abolish the commission, and with it the monopoly right of initiative and the entire acquis.

Therein lies our problem. To repatriate powers, we would have to have an amendment to the treaties, or abrogate them, unilaterally if need be. For complex reasons, which we explain in this piece, the former is not going to happen.

In the case of the latter, parliament could abrogate the treaty tomorrow, if it so wished. Parliament is, after all, sovereign. It is a question of political will. And the will is not there.

Forsyth, however, typifies so much of the eurosceptic community, and thereby explains much of its failures. If the first duty of a general, according to Wellington, is to find out what is on the other side of the hill – the more general doctrine of "know thine enemy" - eurosceptics, Forsyth included, score a massive fail.

Most have nothing more than the vaguest understanding of the nature of the EU, its origins and its workings, their brains clouded by a fog of ignorance and incomprehension. Clear that fog and the issues become clear. We are in the European Union, and remain members bound by its rules, not because of the acquis, but because parliament permits it.

The European Union is not the problem. Parliament is the problem – and it is to there, not Brussels, that our wrath should be directed. The EU is not a matter of foreign domination, as so many eurosceptics wish to believe. It is what our parliament does to us. Everything else is babble.

When this is understood, we might start to get somewhere.