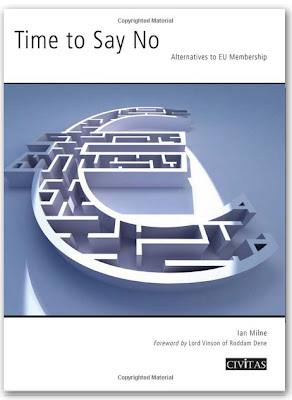 An odd thing about human psychology is that it is sometimes more difficult to deal with praise than criticism. And when you come across something like this - a review of Ian Milne's "Time to Say No" - it looks a bit suss when I say how brilliant it is. You will see what I mean when you read it.

Interestingly, I have not reviewed Milne's pamphlet. I am not going to buy it just for that purpose and I would not read it for any other. If Milne wanted me to review it, all he had to do was send me a copy – he knows where I live. That fact that he has not – dare not? – says more about Milne than it does me.

Chances are, though, I would find exactly the same as Sean Gabb. He finds the main scenario "absurd".

This country is not ultimately governed from Brussels, says Gabb. We are not victims of foreign control. It is a false belief that our own liberal and therefore benign institutions have been checked by the European Commission, and that leaving the EU will have much the same effect as removing a stone from a horse's hoof.

The truth is, adds Gabb, that, just as before 1973, this country is governed from London, and by our own ruling class. All that EU membership has achieved is to help make the exercise of power by this ruling class less accountable.

We thus reach the same conclusion independently, and it is better for it. As I did observe earlier, Milne isn't even past first base. Or, as Witterings from Witney puts it, it's not just the EU people.

Another odd thing about this whole issue, therefore, is that who gets asked to write what depends less on what you know, and more on whether you are house trained. Be the latter and, even if you really know diddly-squat, you will get plenty of invitations. Run the premier independent EU-critical blog, called EU Referendum, and you are on your own.

Nicey-nicey in this game is more important than being righty-righty. The little Tory Boys (mainly) don't like their brains being disturbed.