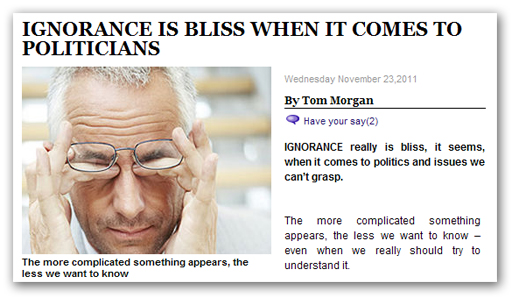 An intriguing report finds its way into the Daily Express, which purports to show that the more complicated an issue appears, the less we want to know about it – even when we really should try to understand it.

This is a report in the current edition of the Journal of Personality and Social Psychology, which suggests that most people "are happier to trust government to get on tackling the big issues of the economy or global warming than try to understand heavyweight issues themselves".

The study of more than 500 adults found those hit hardest by the recession were most likely to avoid negative information about it even if they need it the most, making that North African river an extremely popular watercourse.

When an issue affecting someone appears complex, people feel more helpless and this in turn increases their dependency on others – such as government – to deal with it. Researcher Aaron Kay adds: "This is despite the fact that one should have less trust in someone to effectively manage something that is more complex".

However, there is indubitably more to this than meets the eye. Empirical evidence would suggest that, of the many public policy issues with which we have to deal, many more are marked out (by default more than act) as being "complex" by the media, and either avoided or treated sketchily on a "Janet and John" level.

Certainly, this is very evidently the case when one compares the output of WWII newspapers – and particularly the tabloids such as The Daily Mirror - with contemporary journals. In style, content, depth and the challenge presented, I would put the Mirror of 1940 a cut above either The Times or (especially) the Failygraph.

Thus, while, according to this study, people retreat from complex issues (and have always done so), with newspapers having largely abandoned their adult education role, I would assert that people are less equipped than ever before to deal with public policy issues and are thus more inclined to treat them as "complicated".

There will be more to it than this, but the findings of this survey – and the issue in general – has profound implications if we are seeking functional democracy as a mechanism of government. Education, it its widest possible sense, would seem to be an essential part of the process.