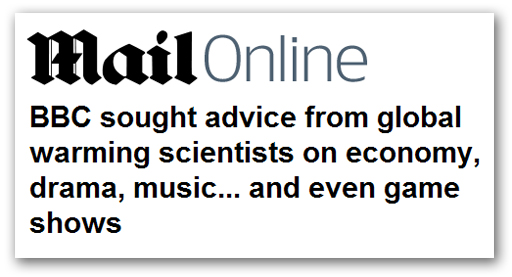 David Rose in the Mail on Sunday writes a very useful piece on the relationship between the BBC and the warmist community, spelling out how closely knit the two had become.

There is nothing ,much new to those who have been following the climaye change issue closely but, as one of our forum members puts it, the biggest-selling Sunday fingers BBC as being dishonestly, systematically, intentionally, knowingly, ruthlessly, implacably biased against global warming sceptics.

One really does wonder how much further the BBC can go, now that the tide is turning against it. To come shortly is Booker's pamphlet for the Global Warming Policy Foundation, on BBC bias, which will also get some MSM coverage, further reinforcing how untrustworthy the BBC has become.

This comes on top of Climategate II which, although not producing any fireworks, is triggering a steady flow of high quality comment, which is pointing up the warmists for what they are.

The revelations may have limited appeal, but if you compare the global warming hype of two years ago with what we are getting in the run-up to Durban, the contrast tells you everything.

We can but repeat that this is a scare that has run its course. The ersatz scientists will never again hold the global community in its thrall to the same extent, on this subject.

Nor indeed can the scientists expect rescue from the political community. That too is a devalued currency. Tellingly, a poll of sentiment on the chancellor and shadow chancellor demonstrates this amply.

When it came to the shadow chancellor, 20 percent chose "out of his depth", 19 percent opted for "arrogant", 17 percent as "smug" and 15 percent "out of touch".

It is unlikely that such sentiments are confined to just this pair. It is extremely unlikely, for instance, that Huhne would score any better, and many would share my personal views on Cameron. Politicians have destroyed their own authority and credibility.

In short, this is not a claque that rules with our consent or approval, nor one which has any moral authority. And the more they hitch their star to the jaded cause of global warming, the worse it will get for them.

Even now, there are some politicians out there whose limited brains permit them to understand that their surrender to the stupidity of the global warming scare has been instrumental in building the contempt with which they are near universally regarded.

Soon enough, in the interests of self-preservation, if nothing else, they too will be ditching their warmist friends. For the BBC though, there is no hope. But our contempt can reach even their lofty ivory towers. They may hold their line, but they will know that they have been called out and their authority has gone forever.