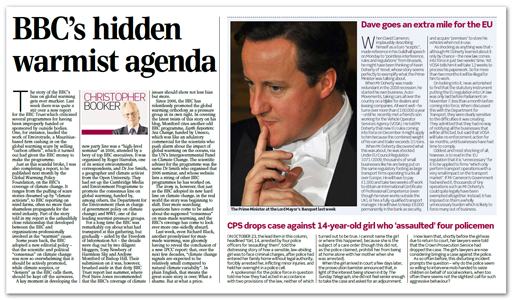 Three stories from Booker this week, two in one tranche and another instalment of "stolen children" which gets its own separate slot.

For obvious reasons, I have had less to do with the making of these stories than normal, although Booker usually runs his own show on the "stolen children". Even though I fully support him in his endeavours, it isn't really my bag.

This week's tale, though, is a good one, harping back last month when the plods banged up a 14-year-old girl for "assaulting" four of their number, after they tried to take her into "protective custody" for the crime of being found at home with her mum.

Arresting the victim of police violence is a classic plod ploy, but in this case four plods against a 14-year-old looked a bit excessive even to the CPS and we learn that they have now abandoned the case.

The girl's lawyers are now considering bringing a case against the police and, as so often before, Booker raises the question as to why the plods seem so willing to intervene mob-handed to seize children on behalf of social workers, when too often there seems not the slightest call for such aggressive behaviour.

There must be a sensible answer to that, but it is one which has so far eluded us.

A question Booker does not ask, in respect of his global warming story, is why anyone still listens to or watches the BBC on this issue – or another other, for that matter. Instead, he goes into rather more detail than I would have cared to on quite how biased the Corporation is when dealing with the subject.

This, Booker goes into even more detail in a forthcoming pamphlet which, although in ursine excretory behaviour territory, does provide useful background on the Beeb status.

This then gives way to a classic Booker "red tape folly" story, with the added poignancy of being an EU tale, just at a time when The Boy is implausibly describing himself as a Euro "sceptic", making reference in his Guildhall to "pointless interference, rules and regulations" from Brussels.

Personally, I think Cameron should be prosecuted under the Trades Description Act, for passing himself off as a eurosceptic, although I guess we could just change the vocabulary. We could call ourselves "outers" and be done with it. That leaves Cameron looking fatuous, as he does here, in other sad tale of pointless interference that makes a lie of any pretence he might have to dealing with the burden of EU regulation.

Three vintage tales then … no answers, unfortunately, but I think we know those already.