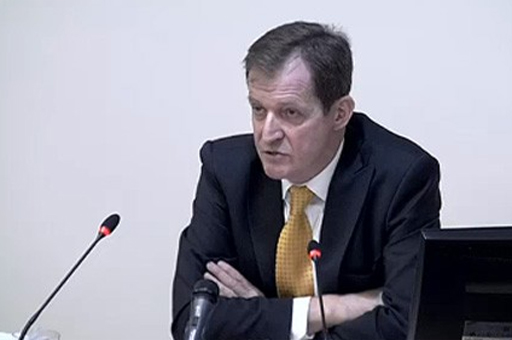 Whatever you might think of Alastair Campbell, his evidence to the Leveson Inquiry is compelling stuff. Much of what he writes, in fact, has been expressed on this blog, to the extent that there is a remarkable degree of agreement at what constitutes a deterioration in the quality of the press, and the reasons for it.

Given his background and reputation, one almost wishes it was someone else writing for, in expressing his view of the press, Campbell expresses sentiments with which we could only concur.

Despite what the UK press has become, he says, I believe in a free press as a cornerstone of a healthy, vibrant democracy. Newspapers must always poke around in the affairs of the rich and powerful. They help hold authority to account. They should always be difficult, challenging, suspicious of power. They must always take risks and push hard for the truth. They must be free to criticise, mock and expose.

Of his many observations in 55 pages (double-spaced) of witness statement, he tells us that the centre of gravity in our press has moved to a bad place; the combined forces, of technological change, intense competition, an obsession with celebrity, a culture of negativity, and amorality among some of the industry's leaders and practitioners have accelerated a downmarket trend, and accelerated too the sense of desperation in the pursuit of stories.

Speed now comes ahead of accuracy, impact comes ahead of fairness, and in parts of the press anything goes to get the story first. Whilst a free press should always be fought for, he says, the impact upon our culture and our public life of what the press in Britain has become has a large debit side alongside the credit that freedom brings.

Campbell thus asserts that news values have deteriorated to the extent that whether something is true counts for less than whether it makes a good story. There is, he says, a culture of negativity in which the prominence and weight given to coverage is not proportionate to the significance or newsworthiness of the matter being reported, but whether it fits the agenda of the outlet, and particularly whether it is damaging to the target of the organisation.

Alongside all this, news and comment have fused, which makes it harder and harder for the public to establish where fact ends and comment begins. This is particularly prevalent in those newspapers - now the majority - which have an agenda, political or otherwise, and who often make their impact by relentlessly pursuing their campaigns, using news as well as comment columns to paint a wholly one-sided picture of an issue or personality.

Once again, this is not new, as anyone who worked for media moguls of the past will testify. But the acceleration of the trend has been clear, as newspapers have relied more on front page impact campaigns and manufactured news, less on hard news in the traditional sense.

There is an interesting paradox that while we have more media space than ever, complaint about the lack of healthy debate has rarely been louder. Fewer stories and issues are being addressed in real depth in a way that engages large audiences; there has been a decline in evidence-based reporting; and despite the explosion in outlets, there are very few days in which there is not a single homogenous theme or talking point dominating the vast output.

When newspapers defend themselves and their role in society, however, they tend to rely on their reputation of investigative journalism, citing great investigations like the Thalidomide scandal as the kind of story they are in business for.

But, says Campbell, the fact we still talk and hear so much of it underlines how few great investigations there have been amid the millions of stories since. The time, energy and resources available to journalists go primarily towards the instant hits and the celebrity exposes, so that real serious investigative journalism such as is represented by Watergate and Thalidomide is actually under threat. That too is the responsibility of those who now lead the industry and edit its papers.

Campbell thus does not believe Britain gets the media we deserve. The press, at a cultural level, he says, has got itself into a position where it thinks only negativity sells, and where the ferocity of competition has led to a decline in standards. The combination has been corrosive.

The principle of the freedom of the press is always worth fighting for, he says. The quality of that freedom however is questionable when the quality of so much journalism is so low, and when so few people - just a handful of men until now seemingly unaccountable to anyone but themselves and to anything but their own commercial and political interests - have so much say over the tone and nature of public discourse, and so much responsibility for the decline in standards. It is also worth fighting therefore - politicians, journalists and public alike – to change the press we have.

To sum up, in his experience of over a decade dealing with the political media, he claims that exaggeration, embellishment and pure invention are endemic, and are tolerated and indeed encouraged by some editors and senior executives

But all this comes at a price. The public, Campbell claims, are smart enough to recognise overblown nonsense and hype, and the decline of newspapers has been hastened by people's weariness and frustration at the lack of any sense of proportion or balance in what the papers offer.

So people are going elsewhere to find information they trust, he says. The rise in social networks is in part based on the concept of 'friends' - we do not believe politicians as we used to; we do not believe the media; we do not believe business and other vested interests; we believe each other, friends and family, those we know.

In the final analysis, this blog exists in its current form because of the failures of the media, about which we have been voluble. We do not believe the media – much of what it says, and spend much time and effort trying to overcome those failures.

The reason we do so is that, as Campbell asserts, a free press as a cornerstone of a healthy, vibrant democracy. And if the press no longer does its job – and it so clearly does not – then someone has to. I take pride in my work, and greater pride that there are so many other bloggers – free spirits all – who are prepared to do the same thing.

Campbell seems pessimistic about whether the press can be improved, and looks to the Leveson Inquiry to recommend changes. But like so many "above the line" figures whose main experience of blogging is Guido Fawkes, he does not understand the degree to which serious bloggers are beginning to fill the political vacuum.

Our weekly hit rate would now be quite sufficient to sustain a respectable political magazine, and our output over a week would easily fill one. Campbell may complain, therefore, and Leveson in the fullness of time, may proclaim. But we are already there, filling the gap.

What Campbell offers is too little, too late. The MSM, I believe, have gone too far down the road to be recoverable. Too many of those that inhabit it simply have not the skills, knowledge or capability to do better than they are already doing. The people have shrunk to fit the media they serve.