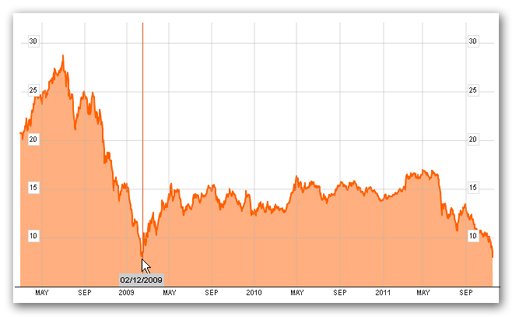 At the heart of the EU's attempts to reduce industrial carbon dioxide emissions is its Emission Trading Scheme. And lest we forget, the idea was gradually to increase the cost to industry of emitting CO2 to atmosphere, thereby to incentivise investment in emission reduction equipment and procedures.

In theory, the price of the EU permits was supposed to increase, providing a ratchet effect, forcing a gradual reduction of emissions in line with the piece increase.

But, as is being widely reported today the carbon price crashed to a five-year low of €7.040, a drop attributed to the effect of the sovereign debt crisis on European industrial production.

The massive drop in production means that there is a massive over-supply of permits on the market – exactly the reverse of what was supposed to apply – triggering the collapse of the price and hence the collapse of a policy.

Like everything else the EU touches, therefore, this is a disaster, both in terms of intended effect and in terms of ladling extra costs on industry to absolutely no effect.

Furthermore, the oversupply is expected to continue, by as much as 212 million tons of carbon dioxide next year, or 9.1 percent of forecast emissions, meaning that there will be no swift (or any) recovery in prices. To all intents and purposes, the effect of the policy on reducing emissions will be nil, with the eventual price expected to bottom out as low as €3, having already dropped to €5.26 for the December 2011 contract.

Bizarrely, though, the "experts" still cling to their fantasies. Janet Peace, vice president of market and business strategy at the Center for Climate and Energy Solutions, a research group and company adviser in Arlington, Virginia, declares that the falling carbon price shows the EU market is responding to changing economic circumstances, as it was designed to do.

"It doesn't mean the programme is a failure", she says. One would love to see her idea of what does constitute failure.