The tax the unelected are desperate to have 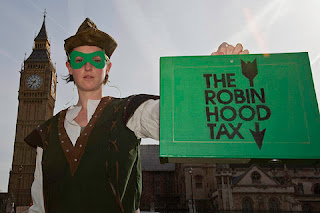 Another guest post today, this one by Greg Browne. The topic of the "Robin Hood Tax" is one which keeps coming back and it seems like good time to give it an airing. You can tax the banks all you like but it is always we who pay, one way or another, as Greg points out...

The Financial Transaction Tax (FTT), Tobin or Robin Hood Tax, what ever you want to call it, is gaining more and more supporters. However few seem to be commenting on the real reason that would be world leaders are pushing for this tax. Of course, in 2005 Dr North, told us that similar moves were “in effect a proto-European tax, the Holy Grail of the integrationalists, who see such a move as the ultimate answer to their liberation from perpetual reliance on member states for funding”. The FTT does promise much, such as:

A tax to overcome the perceived lack of an adequate insurance facility for the global economy, according to the IMF. A new global authority, based on the 'international common good' rather than on 'individual national interest'. The Oct. 24 publication of a 20-page document by the Pontifical Council for Justice and Peace advocated this.

The Roman Church's stance followed from its 2009 “encyclical letter caritas in veritate” in which the pope stated:

Para 67. In the face of the unrelenting growth of global interdependence, there is a strongly felt need, even in the midst of a global recession, for a reform of the United Nations Organization, and likewise of economic institutions and international finance, so that the concept of the family of nations can acquire real teeth. (My emphasis)

Which is surprising since in 1920, in the encyclical, Bonum Sane Pope Benedict XV warned:

"The coming of a world state is longed for, by all the worst and most distorted elements. This state, based on the principles of absolute equality of men and a community of possessions, would banish all national loyalties. In it no acknowledgement would be made of the authority of a father over his children, or of God over human society. If these ideas are put into practice, there will inevitably follow a reign of unheard-of terror."

Infallibility is temporary, or so it seems.

Fidel Castro, from his 2001 speech to the U.N. World Conference on Racism summed up the feelings of many on the left.

The IMF, with the UN in the background, began to see the opportunities and started to get involved in this great revenue raising scheme. At the 2009 Pittsburgh meeting of the G20 the truth began to emerge, according to aim.org:

The "Leader's Statement" endorsed by President Obama and released at the event declares on page 10 that "We task the IMF to prepare a report for our next meeting with regard to the range of options countries have adopted or are considering as to how the financial sector could make a fair and substantial contribution toward paying for any burdens associated with government interventions to repair the banking system."

The term "fair and substantial contribution" is code for a global tax. Other misleading terms for global taxes include "innovative sources of finance" and "Solidarity Levies."

The IMF is set to propose new taxes on global financial institutions. The double-tax plan, which was leaked in Washington yesterday, proposes one levy, a Financial Stability Contribution (FSC), to fund any future government support, and another, a Financial Activities Tax (FAT), that will place a tax on the profits and pay at financial institutions. ... "The recognition that banks should make a contribution to the society in which they operate is right," said Alistair Darling. "Any agreement has to be international and that unilateral attempts would simply risk being undermined."

But back to the real reason that this tax is so 'popular'. As Bruno Waterfield, reminded us in June in his article £3 billion a year in 'stealth taxes' to be levied on Britain:

Janusz Lewandowski, the European budget commissioner, wants tax raising powers to shift EU funding from national government transfers to EU-wide taxation on energy, travel or banking. "I have as an objective a future budget being fed two thirds, 66 per cent by member state contributions, and own resources, one third, or 33 per cent,"

Like Lewandowski, the unelected in regional or global governance positions must find a way to generate revenue that is not at the whim of nation states to withhold, or as Lewandowski put it euphemistically, "We want to make it less politicised" and as Dr North put it in 2009:

The FTT, FAT or whatever you want to call it, can be levied by the UN, IMF or EU or all three and suddenly the cries of No Taxation Without Representation begin to strike home in a meaningful way. Of course, these taxes will be minuscule to start with, but once the principle is established and the mechanisms are in place, what is to stop other innovative taxes being imposed and slowly ratcheted up. But, of course, it will be all for the common good of mankind, wont it? The FTT is only an opportunity for the financial sector to repay the global community for all the benefits it has accrued in all these years of globalisation.

And there you have it… little bit, by little bit, the ratchet tightens and, once the "ice is broken" the way is clear for a "European tax", which can then be extended from its hypothecated base to cover broader expenditure issues. As we said, this is definitely one to watch.

(Note: The FTT idea started life more than 30 years ago)