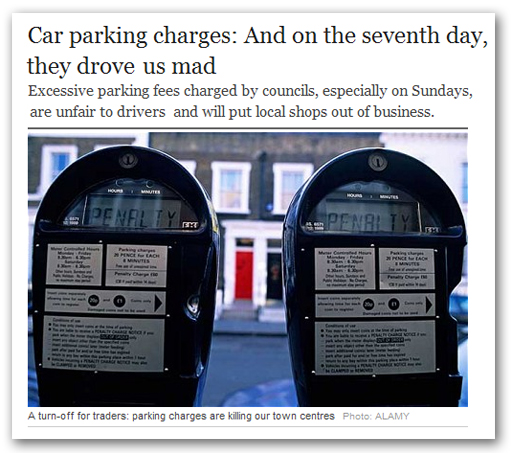 There was a time when I would have thought this piece by Philip Johnston quite good. He writes of an area that few other journalists address, does it well and intelligently, this time complaining about the steady increases in parking fees by local authorities.

It is perhaps a measure of how far we have developed, though, that the piece actually seems lazily superficial. For sure, parking fees are a serious issue, but they are only one small part of a much bigger and much more important picture, the nature of which Johnson does not even acknowledge.

We wrote about that on 9 October, as did Booker, the latter of course being in Johnston's sister newspaper, The Sunday Telegraph. It is perhaps a measure of Johnston that, quite clearly, he has not read the Booker piece - and would not stoop to read a mere blog. He is thus condemned to miss the bigger story – which Booker did better in less space, over a month ago.

But at least Johnston does write about the subject. Despite its importance, very few do and almost all do it badly – especially local newspapers who seem incapable or unwilling to understanding the basics of local authority finance, or the issues attendant upon them.

When what amounts to a quarter of all public expenditure, however, is subject to such poor and very often ignorant scrutiny by the media, you can't really say we have a functioning democracy. As so often, commenters are better informed than the journalists and, when Philip Johnston is the best the media can offer, you can see what a long was they have to go to catch up.

Despite Philip's efforts, therefore, you can also see why newspapers are part of a dying industry and observe that they very much deserve to be. If they cannot do the very basics, they do not deserve to exist.