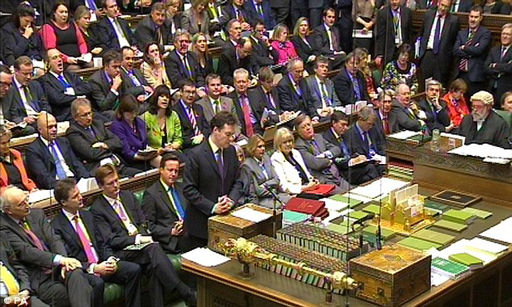 The projected deficit for this current financial year was £122 billion, but we had little doubt that he wouldn’t make it. And sure enough, the preposterous Osborne predicts coming in at £127 billion, meaning that the national debt will increase by that amount this year. So much for "cuts", as public spending overall increases.

And, over the next four years, he anticipates borrowing £111 billion more than anticipated. In 2014-15, he expects borrowing to hit £79 billion, more than double the £37 billion previously predicted, and more even than the £74 billion predicted by Alistair Darling when he was chancellor.

But given his track record – and obvious lack of capability - there is no reason to believe that Osborne is going to be any more successful in meeting future targets than he is in meeting the current one.

Even with a fair wind, this would be difficult but, according to the Office of Budget Responsibility, such forecasts as have been made are "highly optimistic" and are based on the assumption that the eurozone crisis is satisfactorily resolved.

And what that all amounts to is that Osborne is living in fanatasy land. Even though his forecasts are worse than he originally predicted, the likelihood is that the reality will be even worse than that, only the little chappie cannot bring himself to say it.

The most bizarre thing is that the only person he is deceiving – if at all – is himself. This is the man-child with all the economic credibility of a shopaholic given ten new store cards.

He has not the first idea of how to cut back public spending and bring the budget under control, and is thus left to blather unconvincingly about spurious targets, while playing around at the edges, in an attempt to pretend he is in control.

We did not deserve to have such a fool in charge at such a dangerous time, but then as a collective we have too long allowed our politicians the power to destroy our finances, in the belief that there would be no consequences.

Well. consequences there will be, and all the worse for having a child in charge who has neither the capability to take control nor the honesty to admit that the situation is effectively out of his control. With not a grown-up in sight, we can only fear the worst.

And the reckoning, it seems, is not far behind.