UPDATE: "... that's the end of the press conference. Not sure we learned a huge amount", says The Guardian. I'm shocked, I tell yer ... shocked! 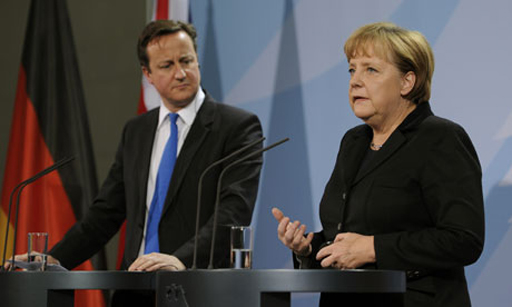 After his breakfast in Brussels with José Manuel Barroso, ready for his meeting with Angela Merkel today, it was too much to expect of The Boy that he would be seeking seriously to capitalise on the eurozone disarray, by seeking a claw-back of powers - despite this wishful thinking boilerplate from David Davis.

Rather, it appears that The Boy is to concede the game, supporting the German chancellor in her moves to strengthen economic union, all in return for Merkel's assurance that the Tobin tax will not be foisted on the City of London. This he does not need to do, as the UK can block procedurally any EU commission plans.

That the game is to be conceded is the Financial Times' "take" of the situation. It is billing today's meeting as "tense" and, doubtless, it will be high-octane theatre. In fact, from the British perspective, that is probably all it will be. Cameron's main aim will be to convince his own Party and the nation that he has a grip of things, thus avoiding the worst accusations of a cave-in which are inevitably going to follow in his wake.

What we seeing today, therefore, is the very worst of all situations, where the different players are speaking to their own domestic audiences, while trying to reconcile the EU dimensions and also trying to calm the markets. Reports will become increasingly lurid throughout the day, as journalists struggle to deal with the tedium of covering these mind-numbing summits, while supplying their editors with something fresh to publish.

Working out what is actually going on, therefore, is and will be near-impossible. Much of the media coverage will be expressed in soap opera terms, while anyone who pretends they have a handle on events will simply not know what is happening.

Later, much will depend on market sentiment on the day and, with the disastrous jumps in Spanish, Italian and French bond yields, there is absolutely no sign that the escalating crisis has been contained, or anything like it. Ambrose Evans-Pritchard pins this down, citing David Heathcoat-Amory to tell us that Germany will do whatever it takes to save EMU, but will still fail – because this is a currency rather than a debt crisis.

Thus, as it was in the beginning, so it is in the end – the fundamentals are wrong. Weaker states are uncompetitive, and without being able to devalue externally, are locked into an internal deflationary cycle which, even at its most draconian, still cannot achieve the necessary results.

Through the next few days, this is something to latch on to. It does not matter what they say or what they do. Their plans cannot work. They are going through the motions and whatever they do, they must fail. It is just a matter of time. No matter how many "secret plans" she has, Germany is not going to fix it. Merkel is no more in command of events than King Kong.

I just wish we had someone more credible our end, capable of looking after the national interest, for when it finally goes belly-up. Instead, as Raedwald observes, we are sending in the Second Eleven to bat.