Chamberlain was a heavyweight 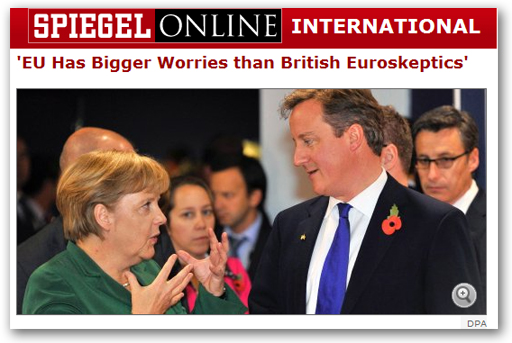 There is something about Germany that brings out in the British media some of its least desirable characteristics. And when you have in Volker Kauder, the CDU's parliamentary leader a stage Hun with all the sensitivity of a plank, and an IQ to match two short versions, you have the setting for a perfect storm.

At least, however, der Spiegel sums up the real importance of the current, and largely engineered spat between Merkel and Cameron. Put bluntly, The Boy is so fundamentally unserious and his concerns so slight that the grown-ups across the water are scarcely bothered with him. Why indeed the meetings of yesterday went ahead is something of a mystery, but they will be soon forgotten as the "colleagues" get back to work on the substantive issues.

That, of course, is the truth of which the British MSM could never speak, being from the same soap-opera school of politics which reduces every issue to one of personalities, with plot lines as challenging as Strictly Come Dancing.

But at least The Boy has been given a hearing, given his brief moment in the limelight, in a carefully stage-managed press conference, and sent packing, where he can prattle in his own time, to his own venal media, without wasting any more of everyone else's time.

So it was that the Merkel meeting has proved, more so than even we imagined, an unsubstantial piece of theatre, entirely devoid of content and deeper meaning, demonstrating the child-like qualities of the Great Leader, who is even more at sea on the European stage as he is on the domestic scene.

Virtually nothing of interest has emerged from the media reports, nothing of interest came from the press conference and the whole affair has the lasting substance of the Chinese meal. Life will go on and the crisis will go on. But The Boy has been sorted, who can now largely be ignored. By comparison, Chamberlain was a heavyweight.

And, unlike past times, as TBF so aptly puts it, the enemy is within.