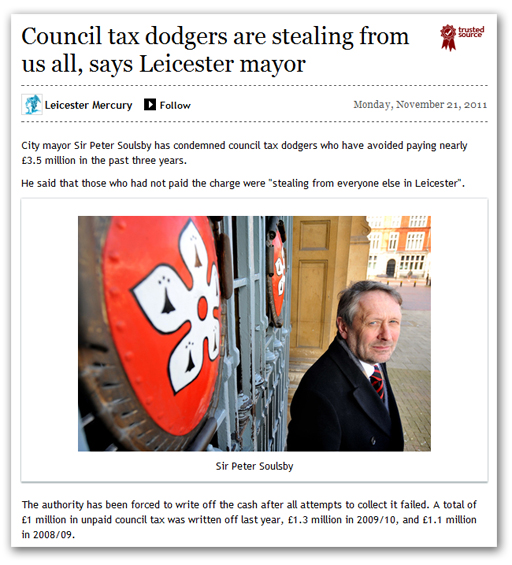 Of all the people in this world to come up with this, Peter Soulsby is possibly the last man with any justification. This is the low-grade slime who most recently wangled himself a pay rise from £56,000 to £100,000 – a man with a history of being extremely liberal when it comes to rewarding himself and his own from the public purse.

That this man, without so much as a blush, can then turn round and accuse taxpayers of "theft" when they show less than enthusiasm for lining his pockets is more than a little staggering – although entirely typical of the breed.

Imbued in public officials such as these is an entirely unrestrained sense of entitlement, a conviction that because they decide – with application of force of dubious provenance – that we owe them a living, we should roll over and pay them what they consider theirs, without demurral.

For sure, it is the case that, should a significant number of people refuse to pay, or otherwise avoid paying, then the burden of taxation then falls heavier on those who are unable to evade payment, but that is hardly a justification for the grand larceny that has become local taxation.

What people like Soulsby so blithely ignore is that they lack mandate and thus any democratic legitimacy for the imposts which they routinely and so easily levy on their taxpayers. That makes their taxes nothing more than legitimised theft. Refusing to succumb to attempts at theft can hardly itself be considered theft.

Soulsby is in fact lucky that we are largely a compliant nation, and tolerate taxation levels for a lack of service which would have other communities out in the streets rioting. Notably, though, when it comes to actually collecting the money, Soulsby relies on his bailiffs and licensed thugs. One would like perhaps, to see him going door-to-door personally, to collect his bunce. It would be interesting to see how far he got.