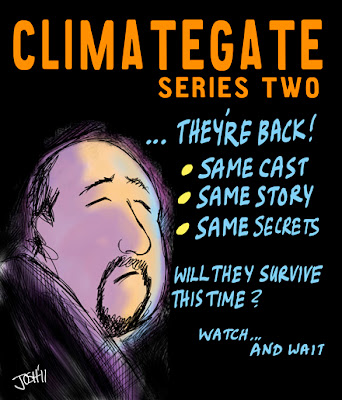 ... with getting 5,000-plus e-mails from CRU and friends is that one now has to read them. The Daily Mail is off to a good start and I've ploughed through about twenty - enough to see that it is going to be a long haul. For most, though, this is the cherry-picking stage, sorting quickly through to find some of the highlights.

My favourite so far is No. 0688. Phil Jones is writing to "Tom and Mike" at NOAA, complaining that he is "being hassled by skeptics to release paleo data and also by others for the station temperature data used in the CRU datasets".

In an especially revealing comment, Jones confides that, "Over the last year or so, I've told people they can't have the station data - go to the GHCN site and get it". He then adds: "I knew that avenue has been closed, but it got some of them off my back".

That is a measure of the man, the scientist. Failing to give the raw data on which he has based his claims, Jones then refers inquirers to a dataset which he knows is not available, for the sole reason of getting people "off my back". Never mind that, knowingly, he is sending them on a wild goose chase.

If we knew nothing more about the man, this would flag up warnings. But from what we already know of him, this comes as no surprise. It is entirely in character.

One wonders what will now come of all this. The release timing is such that, where there is damage to be done at Durban, it will be done - although expectations are so low that it is already being written off as a lost cause.

As to moving on the debate, positions are so entrenched that no one at the extremes of the argument is going to be moved. What emerges will simply confirm existing positions and prejudices.

For the rest, most of the public have lost interest in the climate change scare, and much of the political heat has gone out of the issue. Most MPs will take their feed from the MSM, from which the input may well be minimal. The impact of "Climategate II" therefore, may be hard to assess - even if it is going to be fun following its progression.

Some of the smaller sites are also worth a watch ... Klein Verzet, for instance, tells us the Dutch MSM are shutting down on the issue. Marc Morano, on the other hand, is having a field day, as you might expect.

The race is now on to milk the files.