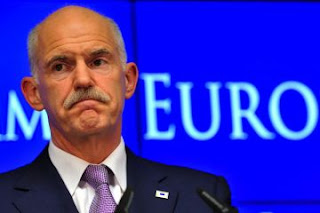 The term 'Arab Spring' entered the vernacular this year as ordinary people and various groups in Tunisia, Egypt and Libya overhauled the leadership in those countries using a varying amount of protest and force. There were protests elsewhere too. Among them the civil revolt in Bahrain was ruthlessly stamped out with the aid of a show of force by Saudi Arabian soldiers.

The uprising in Yemen built upon the existing insurgency in that country as the military and government both split into factions. And the rebellion in Syria continues to rack up the body count behind the media blackout imposed by Assad Jnr.

With this in mind it struck me as utterly ludicrous to hear talking heads on BBC radio this morning referring to the 'European Spring'. The resignation of George Papandreou in Greece and the announcement by Silvio Berlusconi that he would be calling a general election in Italy in which he will not be a candidate, does not constitute a 'European Spring' in any way. Quite the opposite in fact.

The departure of these two Prime Ministers has nothing to do with submitting to the wishes of their countrymen or giving way to popular protests aimed to sweep away the political elite in those countries. What we have seen are the first EU revolutions. For it is not the people, but the bureaucrats supported by the Franco-German axis known as 'Merkozy', who have swept away these two political figures. It is not the interests of the people being served, rather the ambitions of the integrationists being given complete priority.

Rather than a cry for democracy and political accountability, the effective coup d'etat being witnessed in Greece and Italy are their antithesis. The EU, for so long resolute in its effort to subvert representative democracy in order to enable the political class to govern in the interests of the elite and the corporates, is for the first time overtly asserting its control over its provinces.

From the moment Papandreou raised the collective blood pressure in Brussels, by flashing a tantalising glimpse of real democracy within the bloc with his talk of a referendum, his career was over. In little over a week he has gone from presenting himself as the champion of the people to reading out his resignation statement on Greek television. His masters have spoken. An EU approved replacement will be duly delivered into his vacant seat.

The loose canon Berlusconi has long been an embarrassment to the EU elite. Bouncing along from scandal to cock up and back again has long infuriated the faceless legions in Europe. He was always on borrowed time. Now the bond markets have put pressure on Italy and the EU can see a gigantic bail out request looming out of the mist, Berlusconi's time is up. Speculation that his announced departure is a ploy is wide of the mark. The EU will not allow him to remain. It's off to play with his billions and bunga bunga to his heart's content.

It is hard to tell what is more disturbing. The fact this is the face of 21st Century Europe, or that 66 years after the end of a war to overcome tyrrany, the talking heads casually drop into their analysis that the deeper integration required to preserve the Euro will result in less democracy - as if it is an irrelevant triviality.

While people (and opportunists) in parts of the Arab world campaigned, protested, fought and died in an effort to bring about democracy and make their voices the sound of their country, the people of Europe are having democracy dismantled and their voices silenced to serve the vested interests of the political and financial elite.

Editors note... AM requested I illustrated the piece with someone with their mouth gagged. Even with safe search on, that's not something I can google at work. Pass the eye bleach please!
Posted by Pete North at 09:22