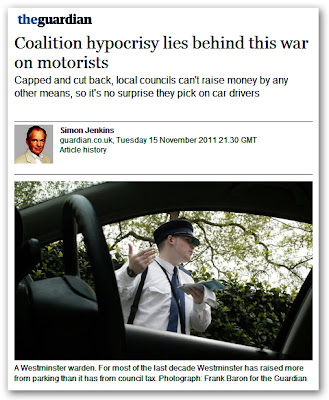 Following on from Philip Johnston's effort on parking charges yesterday, Simon Jenkins visits the same territory in The Guardian today.

It would be interesting to hear views, but having thought Johnston did not do so well, it seems Jenkins has made a better stab at the issue. Not least is the framing expressed in his strap, which declares: "Capped and cut back, local councils can't raise money by any other means, so it's no surprise they pick on car drivers".

Jenkins asserts that there is coalition government hypocrisy behind the current [local authority] war on motorists. With local taxes held down by government order, the councils are unable to resist increasing parking fees and penalties - what drivers in the capital have come to regard as licensed mugging. What makes it hypocrisy is the attitude of the Treasury, which does nothing to restrict local authorities in turning parking into a cash grab.

For all that, though, Jenkins is wrong to put so much emphasis on parking. As we keep pointing out, the council fees and charges issue is much bigger than just parking, some £25 billion annually as against £2 billion annually extracted thought parking fees and fines.

This broader issue really needs the attention. Despite Jenkins having it that local authority revenue is being "capped and cut back", historically both total income and government grants have never been higher, yet their appetite for additional funds has never been greater.

The ability of local councils – with the complicity of central government - to by-pass national restrictions on taxation levels by ramping up fees and charges, is now "squaring the circle", to the extent that it is a major, if poorly-recognised, national scandal.