Up to no good 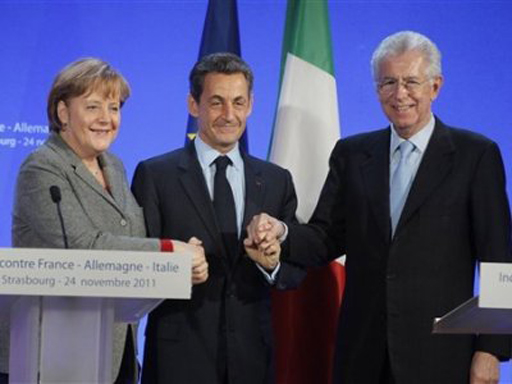 What precisely went on we will never know, but you can be assured that when Sarkozy, Merkel and Italian Prime Minister Mario Monti meet, in Strasbourg of all places, they are up to no good.

The headline outcome of the "Merkonti" meeting is that France and Germany have agreed to stop arguing in public over whether the ECB should do more to rescue the eurozone from a deepening sovereign debt crisis. They would also not seek to change its inflation-fighting mandate when they propose changes to EU treaties to strengthen economic governance. The pair also demonstrated their public backing for Monti.

With the Franco-German motor of integration now in good heart, Sarkozy said Paris and Berlin would circulate joint proposals before the 9 December European Council for treaty amendments. These will include proposals for more intrusive powers to enforce EU budget rules, including the right to take delinquent governments to the ECJ. These are now being hailed as a first step towards deeper fiscal union.

Meanwhile, Reuters has polled 20 leading economists, the majority of whom have predicted that the eurozone is unlikely to survive the crisis in its current form. A break-up is expected, with the survivors forming a "core" group that would exclude Greece.

Analysts believe that sense of crisis will in the end force dramatic action. "I think we are moving closer to a policy response probably, which could be either more aggressive ECB action or the idea of euro bonds could gain some traction," says Rainer Guntermann, strategist at Commerzbank.

Nor is the sentiment being left to the experts. Riot police clashed with workers at Greece's biggest power producer protesting against a new property tax, and Portuguese workers staged a 24-hour general strike.

German bonds fell to their lowest level in nearly a month after Wednesday's auction, in which the German debt agency found no buyers for half of a 6 billion euro 10-year bond offering at a record low 2.0 percent interest rate.

Outside the eurozone, a top British financial regulator said British banks should make contingency plans for a potentially disorderly break-up of the currency area, or the exit of some countries, as the sovereign debt crisis rages on.

"Good risk management means planning for unlikely but severe scenarios and this means that we must not ignore the prospect of a disorderly departure of some countries from the eurozone," Andrew Bailey, deputy head of the Prudential Business Unit at the UK's Financial Services Authority, told a conference.

And so we dig in for the long haul. Nothing fundamental changes, and it is still "when", not "if", although trench warfare seems the order of the day – even if Blitzkreig can never be ruled out.