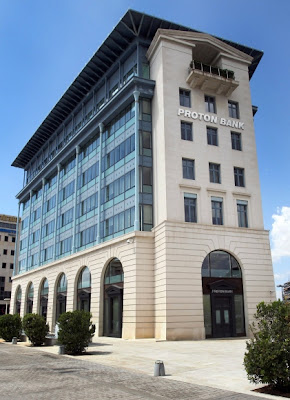 One must never forget that, behind the thin veneer of respectability, virtually every public and financial institution in Greece is tainted by corruption.

That much we have known for a long while, although it is rarely said often enough, especially as it is now apparent that public money (including British contributions) is being used to bail out Greek banks brought down by multi-million frauds.

The latest such was reported in the Frankfurter Allgemeine Zeitung (FAZ) on 11 November, but – unsurprisingly – has yet to be given any coverage in the British media, which is always slow to report on international corruption.

The story concerns the private Greek bank, Proton, from which has been embezzled upwards of €700 million, threatening the viability of the bank. But, despite the sums being unaccounted for, the Greek government has used the EU bailout fund recapitalise the bank to the tune of €900 million.

Covered in more detail in this site and latterly by Zero Hedge, this comes on the back of an international bribery scandal which has embroiled six directors of the Austrian National Bank, including the governor, Ewald Nowotny.

Nor is this a gentle affair between kindly bankers for, as the details of the latest fraud emerged, a bomb exploded in front of a building in Halandri, a suburb of Athens, demolishing four cars.

This, we are told, is not a coincidence: in the building lived a senior employee of the Bank of Greece, whose meticulous investigation of Proton Bank had exposed the massive criminal scheme. According to the police, the bomb was intended as a warning to those who attempt to shed light on these kinds of machinations.

The extent of fraud in the Greek banking system – underwritten by the threat of deadly violence, which inhibits local investigation and reporting – changes substantially the economic calculus in this benighted country. Already beset by political considerations which defy economic sense, the situation is muddied still further by the sheer scale of corruption, distorting the visible economy to an unknown but major extent.

We know of old, that this corruption spreads its tentacles into most countries in Europe, and involves senior commission officials, including commission president José Manuel Barroso. And when corruption, rather than sound economic principles, are the driving force, it is a fair bet that the money flowing into the Greek banking system is not being used as we would wish.

And, as always, the unwitting British taxpayer is being used subsidise this corruption, while the media silence allows the rip-off to continue unchecked. We pay and the thieves get rich.