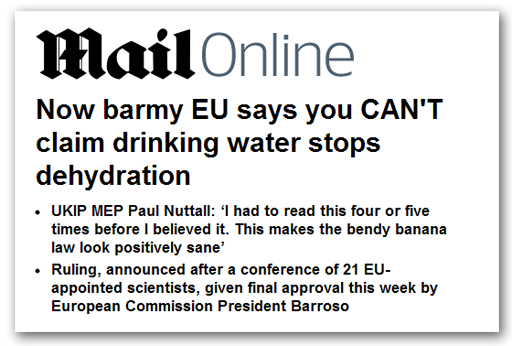 There is much huffing and puffing at the refusal by the European Food Safety Authority to accept the health claim that – as the Daily Wail asserts – "drinking water stops dehydration".

One is always reluctant to rush to the defence of the "colleagues" but, between them and the Wail, one is sometimes pushed to choose which to support. However, in this case, the "colleagues" very much have it as, to accept what the advertising claims would wish to assert, would be an offence against logic.

The issue, of course, is way beyond the pay grade of yer average Wail hack – and most certainly any UKIP MEP. But the learned "colleagues" had to consider whether "regular consumption of significant amounts of water can reduce the risk of development of dehydration and of concomitant decrease of performance".

The logical problem, however, is that, for a health claim to be made in respect of a food, the legislation allows only that such claims can be couched in terms of reducing "risk factors". It must significantly reduce a risk factor in the development of a human disease. That is what the law says.

In this context, a soothing infusion of herbal tea, which went toward reducing stress, could support claims of reducing hypertension, the former being a "risk factor" in respect of the latter.

When it comes to dehydration, though, the claim is made that drinking water actually reduces this condition. But, dehydration is a measure of the disease, not a risk factor leading to it. And, as any good Jesuit will tell you, one could not possibly allow the effect – actual disease reduction – to be characterised as a reduction in the risk of acquiring that disease. St Ignatius would turn in his grave at such a proposition.

Thus, despite the ignorant posturing of the British media, the refinements of the Continental mind have prevailed, and we are saved from the fate of having sellers of over-priced water committing egregious offences against logic.

It was things such as this for which we really joined the European Union, and thank goodness we did. It was not a moment too soon.