The greatest delusion of them all 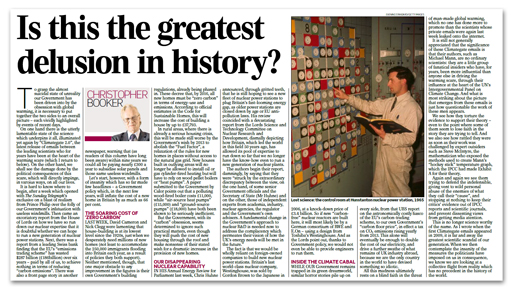 Booker devotes his entire column this week to the great global warming delusion, picking up on the back of Climategate II, four separate issues which, as he says, makes climate science into science no longer worthy of the name.

As he wrote when the first Climategate emails appeared in 2009, the global warming scare is far and away the greatest scientific scandal of our generation. When we then contemplate the insanity of the measures the politicians have imposed on us in consequence, we know we are looking at a collective flight from reality which has no precedent in the history of the world.

Of that flight from reality though, there can be no more spectacular than the government's quest for the "zero carbon" house, coming at a time when Cameron and Clegg are lamenting that house-building is at its lowest level since the 1920s.

Yet, when a whole generation of would-be first-time buyers are having to reconcile themselves to decades of renting properties, the government is phasing in a new set of Building Regulations which will require that, by 2016, all new homes must be "zero carbon" in terms of energy-use and emissions.

According to official estimates in the Code for Sustainable Homes, this will increase the cost of building a house by up to £37,793 or up to 66 percent in the case of a two-bedroomed starter flat of the type favoured by first-time buyers.

And if this is not bad enough, the government is also eliminating a special "concession" known as the "Fuel Factor", which relaxes the heating rules for new homes in places without access to the natural gas grid.

Instead of being allowed to install oil or gas cylinder-fired heating, they will have to rely biomass-fired boilers or "heat pumps" – both of dubious efficiency, adding a further cost of between £11,000 and £18,000, for a target market which is less able to afford low-end housing than their urban counterparts.

One could venture that, as so often, we have in government the classic example of the left hand not knowing what the right is doing, as we see Cameron unveiling a £400 million plan to underwrite mortgages for first-timer buyers.

Yet, in all the guff written about this scheme, not once do we see any discussion of the government intent to increase the costs of starter homes by up to two-thirds, thus ensuring that, with or without mortgage assistance, they remain an unreachable aspiration for the majority.

And that seems to be the effect of the "great delusion" – it adds to public policy an air of unreality, destroying the sense and effectiveness of other policy initiatives, all in pursuit of a miasma which is unravelling as we speak.

How our politicians have allowed themselves to become so deluded is one of those modern mysteries, but one wonders whether the breed will ever recover any of its credibility after allowing itself to be so misled by such an obvious and expensive scare.