On the brink of fragmentation 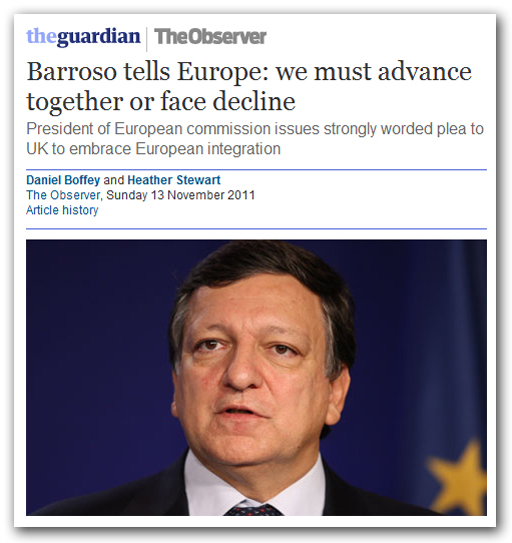 The front edge of this wishful thinking in the Observer is, we are told, a sharp rebuke to eurosceptics from José Manuel Barroso.

Barroso warns that all members of the EU need to unite and "advance together", citing Remembrance Sunday to warn that that "actions have consequences". He then repeats the familiar mantra that "peace and prosperity will best be furthered by Europeans supporting and trusting EU institutions, rather than allowing the continent to fragment politically and economically".

What are interesting though are his further comments, where he writes: "In this defining moment, we either unite or face irrelevance. Our goal must not be to maintain the status quo, but to move on to something new and better," he says.

He adds: "I hope when historians look back on these unprecedented times, they will understand that we stepped back from the brink of fragmentation. I hope they will see how the UK fully engaged with fellow member states and institutional partners to ensure the stability of the EU".

Flogging a dead horse though he might be, this is an important statement – an official recognition from the commission president that the EU is "the brink of fragmentation". Such may have been obvious to most of us for some time now, but this is akin to the captain of the Titanic admitting his ship is sinking.

All we need to do now is help it on its way.