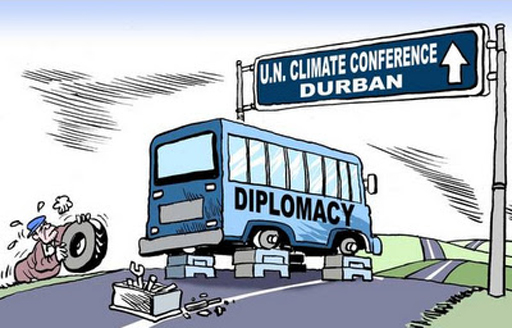 Public indifference is probably the great killer, although some pundits put it down to a lack of ambition on the part of the negotiators. Either way, The Independent is very far from being alone in predicting deadlock at the forthcoming COP17 climate summit at Durban.

The amount of human energy being expended is terrifying, with 10,000 officials from 194 countries meeting to discuss the next moves. And although the number of hangers-on and journalists attending will not match Copenhagen levels, about 25,000 people in all are expected to attend.

However, says the Independent, "entrenched disagreements" over renewing the current climate treaty, the 1997 Kyoto Protocol – between China and India on the one hand and Japan, Canada and Russia on the other – look likely to produce a stalemate at best, and at worst, a collapse of the talks.

The dispute over Kyoto, essentially an argument between rich and poor countries about who does what to combat global warming, brought the 2009 Copenhagen conference to within a whisker of complete breakdown.

Crucially, the Kyoto treaty expires on 31 December 2012. Developing countries, led by China, now the world's biggest carbon emitter, and India, now number three, want Kyoto renewed because it commits them to no action of their own, while imposing binding emissions cuts on industrialised states.

Yet some of the industrialised nations increasingly see this as unfair – America, the world's second-largest carbon emitter, was the first major country to refuse to join Kyoto in 2001 – and a group of three major economies, Japan, Canada and Russia, have stated they will not sign a renewed Kyoto under any circumstances.

Thus, hope is being pinned on an initiative being pushed by Britain and the EU, where the original Kyoto treaty is abandoned in favour of "mark two" version, which would commit China and India eventually agree to take part in a parallel new climate treaty, which would involve all countries in a binding agreement to cut CO2 at different rates.

Such a deal, though, is not expected at this conference and the Huhne team is not expecting anything form until at least 2015, by which time Huhne himself may be history. But then, as Dellers points out, Huhne hasn't got a leg to stand on. As significantly, the economic climate may have deteriorated so drastically that climate activism may by then be history.

Even then, the 2015 date may be fiction, with 2020 being marked down as the more realistic date for a full-blown international agreement. In diplomatic terms, though, that sort of timescale effectively means sometime never. In nine years time, the world may have changed beyond recognition.

The New Scientist's Fred Pearce is thus talking of a "lost decade" in climate talks. And if even he is acknowledging this, it is hard to see how the momentum can ever be recovered. The climate "community" is another one of those which has run out of options and is looking down its nose at failure – trumped by a potential global economic crisis. The scare has all but run its course.