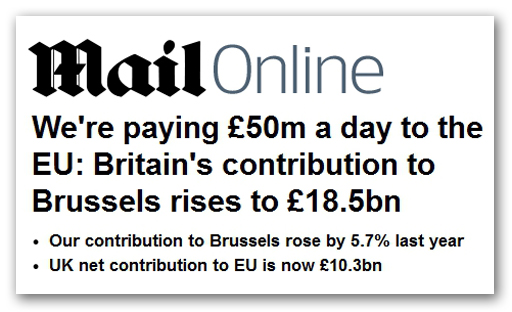 Autonomous Mind picks up what he calls "posturing" in the Daily Mail over the British contribution to the EU, it having now reached £18.5 billion or £50 million a day.

Interestingly, this is almost one tenth of the £180 billion British taxpayers "contribute" to local government (in all its forms and appearances), adding £500 million a day to our personal costs. We see no headlines on this though, despite the spending having quadrupled in real terms since 1972.

Skirting past the Farage boilerplate, where we are told that: "We are paying more than ever before for our EU membership and are getting less in return" (rather like local government), the Mail then tells us that the figures are likely to strengthen the hand of Tory Eurosceptics who argue that Britain is getting a raw deal from the EU.

Why that is the case also is not specified, as "Tory Eurosceptics" (as opposed to the real thing) do not in the main want to leave the EU, and therefore, would accept some degree of membership payments. As with the Mail though, they do not specify how much.

But then this is all about propaganda, and the message is that, if we were not spending £50 million a day on the EU, we could spend it on many other things, from more and better schools, to debt reduction – except that we could not.

Here, for instance, no one supposes that, should we leave the EU, farming subsidies paid into the EU and returned to us would automatically cease. Nor indeed would the huge amounts paid into the EU's research budget and then paid to British academic institutions. Arguably, we would continue to pay as much, if more, into both those accounts - and many others.

By the time you have added up paying for policies that we have repatriated, rather than abolished (such as the fisheries policy), and also fees to international organisations that are at present covered by our EU subscription, the amount of money saved from not paying the EU would be minimal – a small fraction of the £18.5 billion.

The greater saving would, in fact, come from repeal of the torrent of EU legislation, and the development of different and more economic ways of regulating society. Such costs run to £120 billion or more, annually, and it is there where we could see a real renaissance in commercial activity, once liberated from this burden.

However, no political party (including UKIP) , nor newspaper, has any real idea of how to re-order the regulatory burden and, like as not, even if we did leave the EU, much of the burden would remain, or even increase – as have the now massive payments we make to local government.

Thus we find ourselves in the position of being enjoined to chase illusory savings, while ignoring far greater savings which could accrue as a result of our leaving the EU, but only if we had a sensible and far-reaching plan for re-ordering how we run society.

That unreality is probably the reason why the EU budget contributions issue has never gained any real political traction. People may tut-tut at the headline figure, but the polemics do not represent anything real. A more serious and considered case for savings needs to be made.