In the "stupid camp" 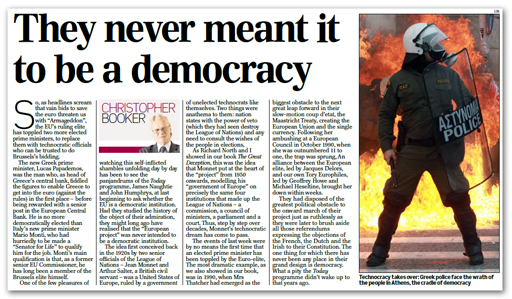 The European Union, now and for as long as it continues to exist in its present form, will remain in crisis. One side-effect of that is we will have to tolerate a procession of fools, airing their ignorance of diverse aspects of the subject, having neglected the basics for so long that they are completely out of their depths.

Amongst those are the panjandrums of the Today programme, James Naughtie and John Humphrys who, Booker reports in his column, are at last beginning to ask whether the EU is a democratic institution. More charitable than I, Booker announces this as one of the few pleasures to come from watching this self-inflicted shambles unfolding day by day. Personally, I think it it is pathetic.

Just as an aside, one way of illustrating the fatuity of the discussion is to ask whether a supersonic jet bomber is luxury cruise liner. The answer (polite version) might be that a supersonic bomber is not designed as one and should it miraculously became a luxury liner, it would no longer be a supersonic bomber. The question really is that stupid.

This much Booker also tells us, in a more measured manner – it being his penance to suffer these fools. Had they studied the history of the object of their admiration, Booker says - much less earned the money for which they were excessively paid - they might long ago have realised that the "European project" was never intended to be a democratic institution.

Giving the pair a free history lesson that they are too idle to arrange for themselves, the idea first conceived back in the 1920s by two senior officials of the League of Nations – Jean Monnet and Arthur Salter, a British civil servant – was a United States of Europe, ruled by a government of unelected technocrats like themselves.

Two things were anathema to them: nation states with the power of veto (which they had seen destroy the League of Nations) and any need to consult the wishes of the people in elections.

As we showed in our book The Great Deception, this was the idea that Monnet put at the heart of the "project" from 1950 onwards, modelling his "government of Europe" on precisely the same four institutions that made up the League of Nations – a commission, a council of ministers, a parliament and a court. Thus, step by step over decades, Monnet's technocratic dream has come to pass.

But now, even with Papandreou gone and Berlusconi just resigned, the events of last week were by no means the first time that an elected prime minister has been toppled by the Euro-elite.

The most dramatic example, Booker reminds us, was in 1990, when Mrs Thatcher had emerged as the biggest obstacle to the next great leap forward in their slow-motion coup d'etat, the Maastricht Treaty, creating the European Union and the single currency.

Following her ambushing at a European Council in October 1990, when she was outnumbered 11 to one, the trap was sprung. An alliance between the European elite, led by Jacques Delors, and our own Tory Europhiles, led by Geoffrey Howe and Michael Heseltine, brought her down within weeks.

They had disposed of the greatest political obstacle to the onward march of their project just as ruthlessly as they were later to brush aside all those referendums expressing the objections of the French, the Dutch and the Irish to their Constitution. The one thing for which there has never been any place in their grand design is democracy.

And thus do we get the conclusion to the column that it is a pity the Today programme didn't wake up to that years ago. But it was never to be. These "above the line" people simply do not have the mental framework to understand the things they are told.

Unfortunately, they are not alone. The Times leader yesterday pretentiously told us that "the euro crisis is unfolding far from its people and the democratic mandates of government". Well, no shit Sherlock! We needed a newspaper to tell us this?

Then witness the bizarre pretentions of Charlie Moore, who is Mrs Thatcher' biographer and should know a great deal more than he does.

He employs the traditional trick of burying his own ignorance in layers of apparent erudition, filling space without having to resort to detail or understanding. But, like the Today duo, he too fantasises about the need for democracy, going so far as to assert that there is common cause between Left and Right on this issue.

Left and Right in their anti-establishment forms – should agree that this is not the time for technocrats and Frankfurters. I have a more original idea, says Moore. How about a few democrats?

That is the measure of the man who sees in this the principles that should guide the coming, inevitable renegotiation. Not yet (or ever) can he cope with the idea that the European Union is a failed experiment – one doomed to failure – and its only and only future is one of abolition.

But then, we have a lot of people in the "stupid camp", some like Charles Crawford who are so keen to parade their own ignorance that nothing is going to save them. They have worked hard for their exalted positions, and they are not easily going to yield to lesser mortals.

This fool, like the rest, is another one talking about "renegotiation", one glibly referring to rumours swirling that "Eurozone 2.0" will emerge from the current shambles: tighter, tougher, more honest, more "federal". This is another man who wants to turn a supersonic bomber into a luxury cruise liner. They just cannot see their own stupidity.

And so it is that, day-by-day, the "stupid camp" becomes more and more populated. Its denizens will never change – they cannot. The world is going to have to move on without them. A whole new generation will grow up, one in which the current brand of stupidity is taken as read. Then, and only then, will we make serious progress.