The president has spoken 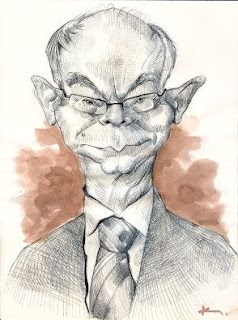 One easy way of identifying a europhile is to talk of anti-EU feeling. He (and they usually are male) will immediately refer to "populism", the anathema to the ruling élites of Europe, who clearly fear those who are able to appeal to popular sentiment.

So it is with Herman Van Rompuy, president of the European Council, interviewed in The Daily Telegraph today, revealing himself as an unreformed authoritarian.

Given the opportunity to address the British people – or, at least, Telegraph readers, which is not quite the same thing - he instead addresses British politicians, a seemingly odd thing to do in a newspaper interview. And he tells those politicians that it is their job "to convince their population" [about the EU]. "They are elected, I am not elected," he says.

Waxing lyrical about the construct, he then declares: "Let's defend all this," informing us that, "People are keen to believe in something and hope ... when I talk to people [and] … speak in the language of hope, stressing not just the problems and challenges but also what we have achieved, then there is relief."

As one would expect, Van Rompuy is dismissive of eurosceptics, arguing that "you can always invent 30 arguments to demolish all this" [the EU], but: "The populist is for the easy solution. He needs no effort from the population."

He thus puts the "rising tide of populism in the EU that had made Brussels a target" down to "a strong anti-authority feeling against all those who have responsibility, who are in charge, in the school, in the Church, in the government. They are rather easily discredited [and] … easy targets. Europe is a form of authority and Euroscepticism is along those lines."

Then you begin to see why he is talking to the politicians. He praises Gordon Brown, who "ratified the Lisbon treaty against stiff domestic opposition", and expresses admiration for his 2007 book Courage, asserting that "Populism and courage are opposites."

Van Rompuy then offers praise for successive British governments for defying popular Euroscepticism. "I am not for criticising any British government of the past 20 or 30 years because the fact is they have approved the Maastricht treaty, the Amsterdam treaty, the Nice treaty and the Lisbon treaty," he says.

"Europeans cannot complain, British governments are working with us for the Europe as we know it today. Conservative governments, Labour governments: they approved the main treaties of the EU and they comply with European directives as well."

And there you have it. No populism from Van Rompuy. A member of the ruling élite, he speaks to his own kind, allowing us very graciously to listen in as they are given their marching orders. You must speak in the language of hope, he tells them, and all will be well.

The president has spoken.