Regular readers may have surmised, from the relatively light blogging last week, that I have been otherwise engaged. And indeed I have, working flat out on the "ash crisis" for the Mail on Sunday. The piece I originally wrote was for the features desk, but was snaffled by "news" and appears in heavily truncated form here (spool halfway down).

What I have done, therefore, is publish below the original, early version of the piece as submitted and worked on by my editor, the seriously impressive Laura Collins. Even then, there are updates to this piece, but rather than mess around with it, I'm putting it up, "as is" and will then write another post, updating it and exploring some of the issues arising, and other developments. So here goes: 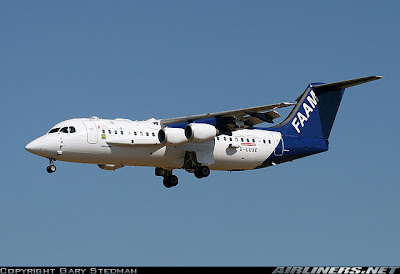 At 11o'clock last Tuesday morning a flight took off from a small Bedfordshire airfield and climbed into the empty skies above Britain. It flew up the country's east coast, several times - each a clear, level run. It landed at Prestwick at half past one, refuelled and repeated the exercise this time flying back down the west coast.

Aboard were Met Office and Facility for Airborne Atmospheric Measurement (FAAM) scientists, tracking and measuring volcanic ash density through aerosol layer. They studied the engine on landing, stripping it back and testing. Shortly after the blanket flight ban that had paralysed the air industry since the eruption of Eyafjallajokull two weeks ago, was lifted.

By the time that announcement was made 22 British Airways flights were already entering the 'no-fly zone.' Thousands of miles away and many hours earlier they had set off 'confident' that their planes would be able to land at Heathrow and Gatwick.

It was a bold move but it wasn't a gamble. They had sent up their own test flight two days earlier. They had measured the density of the volcanic ash at cruising altitude. They had examined the engines and conducted borescope inspections.

They had established the facts. They had data - which, The Mail on Sunday has discovered, is more than the Civil Aviation Authority (CAA) had when it issued the blanket ban six days earlier.

But then BA - along with Lufthansa, Air Berlin and Finn Air, all of which sent up test flights - had at their disposal something absolutely vital that the CAA and the Met Office did not: planes.

Hard to believe, but the fate of our aviation industry last week hung on just one aircraft, a BAE 146. It is the only plane in the London Volcano Ash Advisory Unit's armoury capable of sampling air at the necessary. And until Tuesday it was grounded, stripped of its instruments, undergoing a paint job.

While technicians worked round the clock to reassemble the aircraft the government was forced to rely on a much smaller, German registered turbo-prop aircraft, a Dornier 228. With its limited range and performance it plodded through the skies unable to deliver key data. Even then, it was only to fly on Sunday 18 April, four days after the ban had been imposed. Academics thus had to base conclusions on theoretical models, insufficiently bulked out with data gleaned from flights.

Lifting the ban last week National Air Traffic Service (NATS) admitted that: 'The information about how aero engines could cope with adverse ash conditions only became available yesterday.' ie Tuesday. It was no coincidence that the BAE 146 had finally got off the ground. Nothing could illustrate more clearly that, while the disaster was natural the mishandling was entirely man-made. And the decisions that led to this costly shambles actually go back years.

We have looked into the protocol followed, the agencies involved and the resources at their disposal and it is hard not to conclude that it wasn't volcanic ash that threatened to bring the air industry to its knees but decades of neglect, underfunding, poor planning and layers of bureaucracy that underpin the government and Europe-wide response to it.

This, despite the fact that the ink had barely dried on a contingency plan drawn up by the International Civil Aviation Organisation (ICAO) in September 2009.

So what went wrong and why?

Starting with the events last Thursday, as the cloud of ash from the Eyjafjallajokull volcano was creeping towards the UK the first people in the hot seat were not the air traffic controllers but a team of eight scientists working for the Met Office in an obscure office called the London Volcano Advisory Centre (LVAA).

These specialists don't spend all their time working on volcanic ash mapping and forecasting but are called in on an emergency basis. Their job was to provide the aviation industry with forecasts on the spread of the ash and to warn pilots of where it was unsafe to fly.

Their tool in this instance was a computer model called NAME and, as they ran their simulations, it became clear that first the northern part and then the whole of the UK was going to be covered by the ash cloud. Closing down airspace, or even advising it, was not in the job description. The LVAAC could only pass its forecasts onto the National Air Traffic Services (NATS).

In the early stages of a volcano eruption there is very little hard data available. Models have a good track record of predicting ash dispersion. Nevertheless it was at this very early stage that things started to go wrong. For while computer models have good short-term accuracy with time and distance, uncertainties and modelling errors build up and they get less and less reliable.

Furthermore these models cannot provide the all-important detail of particle density - how many dust particles there are in the air - which has a direct bearing on whether it is safe to fly. To an extent, satellites can fill in some of the gaps and there is ground-based measuring equipment which can also be used to measure particle density but the equipment is thinly scattered and the results unreliable. To get the detail required teams have to fly up into the path of the dust in specially equipped aircraft and collect physical evidence.

And here what happened and what the ICAO recommended start to diverge for reasons we shall address. The ICAO recommends three clear phases of response: Alerting Phase, Reactive Phase and Proactive Phase. Nowhere does the ICAO suggest closing airspace completely - rather it talks of rerouting flights and taking a pragmatic approach based on continued measurement of the ash present in the air.

And therein lies the problem. The information needed to make a true judgement was not available because the aircraft were not available. Unable to establish what was a safe threshold for ash particles in the atmosphere and unable to navigate through the variety of manufacturers' own design parameters the 'easy' option was to put it at zero.

During and after the Second World War the RAF had a large fleet of aircraft which could be used to sample volcanic dust, but this was progressively whittled down until 1964 when the last meteorological flight was disbanded by the Macmillan government.

The UK capability, however, remained high, as a number of V-Bombers had been adapted for air sampling, mainly to measure nuclear fallout in the case of war. But as these were progressively retired the capability was not replaced.

That left a small RAF-operated meteorological research flight which by 1980 comprised just two aircraft - a converted Canberra jet bomber and a highly equipped C-130 Hercules transport, nicknamed by its crew, 'Snoopy.' Under the Thatcher defence cuts two became one - the single Hercules which survived until 2001 when, to reduce costs, Blair's Labour government sold off Snoopy, ending military involvement in operating meteorological aircraft.

After a gap of four years a single BAE-146 was acquired, primarily as a research aircraft for civilian projects, to be used anywhere in the world. And so it was that the fate of so much rested on this solitary plane. It is hard to square this reality with CAA Chief Executive Andrew Haines's assertion that Britain had 'led the way,' in establishing the new safety threshhold for the volume of ash particles in the atmosphere that led to the ban being lifted. Arguably the safety threshold announced on Tuesday was not new it was merely the first one properly established.

Across the rest of Europe things were not much better. Theoretically a fleet of 24 aircraft was available, including the British pair, but not all were suitable. One in fact was a microlight. Only five fast jet of the type needed were actually on the atmospheric research agencies' inventory.

Because until two weeks ago Volcanic Ash was not nearly such a hot topic as, say, Climate Change. Money has been thrown at climate change research and monitoring - the British Met Office has received over £200million for that purpose - while other meteorological services have been starved of funds. The LVAAC depends on Eurocontrol enroute charges for its funds - a sort of toll paid by the airlines that fly through its space. That is clearly not enough.

The blanket ban was, then, governed as much by what we did not know as what we did. And while there is no European law governing just what to do in the event of a volcanic eruption affecting the skies in this way we are bound to our fellow European states by historic treaties which prevent us from being able to close our skies unilaterally and make the prospect of opening them unilaterally problematic.

But with shared responsibility comes no real responsibility - or accountability. As dissatisfaction over the past few days grows the European Commission has claimed it occupied only a 'side-line' observational role in all of this. This is misleading. The contingency plans may have started with the United Nations body of the ICAO but they were agreed upon by a galaxy of authorities including the European Union, the EU aviation control agency, Eurocontrol, the British government and all the other EU member state governments plus their safety agencies.

According to International Air Transport Association (IATA) Director General and CEO, Giovanni Bisignani, the crisis management was characterised by, 'no risk assessment, no consultation, no organisation and no leadership. Governments have not taken their responsibility to make clear decisions based on facts.'

If we are to learn anything from this fiasco guilt must now be shouldered where appropriate and an honest reassessment of priorities made. The ICAO likens the volcano watch service to an airfield fire service. You hope you'll never have to use it, but it should be well equipped and its people well trained, just in case.

Instead, as we have discovered, successive governments have sold off our 'fire engines.' The plethora of agencies involved are doing their best to throw up a smokescreen that rivals Eyjafjallajokull, but the truth is that what we have witnessed over the past two weeks and what kept planes out of the sky for so long was not volcanic ash but generations of neglect.