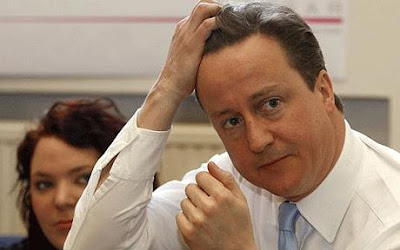 It says a great deal that the munificent Boy King is prattling about "giving" four million married couples tax breaks worth up to £150 a year, when his party's energy policy is set to cost every couple in the land an average of £600 per year (as a conservative – if I may use that word – estimate).

And that, as Carl Mortished of The Times has suddenly discovered, is precisely the intent of the green-tinged policy. It commits us to more expensive and less efficient energy production for no good reason other than to pander to the climate change obsession, of which the Boy is a prime advocate.

Equally, we see a "shock-horror-probe" sort of response when it is suggested that Tory policies might "cost" 40,000 public sector jobs – when to make any significant inroads into the annual deficit of £160 billion, we should be looking at 400,000 job losses, and then some.

Merely financing that deficit is set to cost every household in the land £60 a week, which again knocks little Cammy's £150 a year for low-middle income married couples into touch.

But this is what is characterising the election campaign – the politicians dancing round the edges of the big issues, making marginal adjustments to marginal policies. That they then expect us to get excited about them is, frankly, an insult to our intelligence. They may think they are dominating the headlines. The actual response is indifference, compounded by derision.

Voting for these educated, arrogant and vacuous fools, says Autonomous Mind, is a vote in favour of slow, inexorable decline, the dramatic extension of the impoverished underclass reliant on the state that is in turn reliant on debt and borrowing, and eventual societal breakdown. Will they talk about this? I guarantee you they won't, he says.