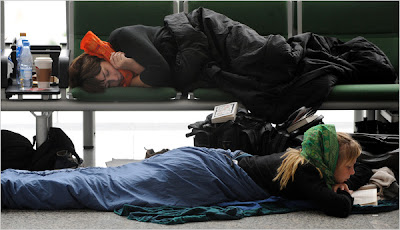 The International Air Transport Association has sharply criticised European governments for their "lack of leadership" in handling the closures of the Continent's airspace.

This is relayed to us via The New York Times, which cites Giovanni Bisignani, IATA director general and chief executive. He says: "We are far enough into this crisis to express our dissatisfaction on how governments have managed it, with no risk assessment, no consultation and no leadership."

With a ministerial meeting taking place this morning in Brussels, Bisignani adds: "In the face of such dire economic consequences, it is incredible that Europe's transport ministers have taken five days to organize a first teleconference."

Laying into the region's decision-making process for closing airspace, he then said: "This not an acceptable system, particularly when the consequences for safety and the economy are so large," referring to the methodology, which is based on computer models.

Airlines have also formally complained that European governments are overreacting to the threat, relying on incomplete data from computer models rather than real-world safety tests in the air above Europe. In a blunt statement yesterday, representatives of Europe's airlines and airports called for "an immediate reassessment of the present restrictions."

The call was amplified further by Bisignani on the BBC Radio 4 Today programme, who called the restrictions an "embarrassment". Picked up by The Daily Telegraph, we learn that he said: "This is a European embarrassment and it's a European mess ... It took five days to organise a conference call with the ministers of transport. Europeans are still using a system that's based on a theoretical model, instead of taking a decision based on facts and risk assessment."

"This decision (to close airspace) has to be based on facts and supported by risk assessment. We need to replace this blanket approach with a practical approach," Bisignani concludes.

Once again, therefore, it looks as if ministers have been asleep on the job, letting the techies play with their computer models, without adequate supervision. But the real fault goes back to 2009 when the disastrously inadequate IACO contingency plan was agreed, lacking precisely the "risk assessment" that Bisignani is now calling for.

The reliance on this and the Met Office with its computer models has produced a mix far more toxic and damaging than any volcanic cloud, seemingly beyond the reach of ministers. As with global warming, and Foot & Mouth in 2001, they appear to be besotted with computer models, rejecting real-world experience for the allure of glitzy graphics and animations.

So far, it is estimated that the shut-down has cost the aviation industry some $2 billion, with further losses rippling through the wider economy. The time has come, methinks, for a bonfire of computers.