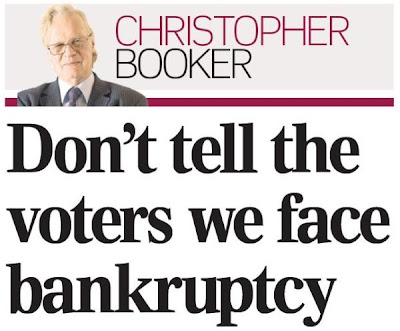 This blog and a few more have made the point. And latterly, the politicians have been compared with drunks in a karaoke competition. Now, it's Booker's turn to point out, in his column the simple fact that none of the politicos and their claquers want to admit, that this election is a painfully empty charade.

With the latest poll putting the Tories only eight percent ahead – 26 seats short of an overall majority – it would appear that there are many people who would agree. Despite his frenetic activity, the Boy Cameron has failed to (so far) to engage with the increasingly disinterested electorate and, according to a poll in The Independent, two-thirds of voters distrust both Labour and the Tories over the deficit

And that is precisely the focus for Booker, who says there are four huge shadows that hang over this "claustrophobic" election. The first is the "barely imaginable scale of the deficit in public spending", increasing at the rate of half a billion a day and set to cost us the equivalent of £60 a week for every household in the land just to pay the interest on the debt.

But what strikes us so forcibly is the utter unreality of the political debate, illustrated last week by the Tories' claim that they could cut spending by £12 billion. That is the amount the debt is rising every month. Not, of course, that Labour is any better, boasting that it could save half a billion a year by cutting out NHS waste – the amount our debt is increasing every day.

The second shadow over this election is the unprecedented damage done to our politics by the expenses scandal, which has degraded the standing of Parliament to its lowest point in history.

More than anything, says Booker, these revelations have reinforced the realisation that we are ruled by a political class in which the three main parties are blurred indistinguishably together, almost wholly divorced from the concerns of the rest of us. Never have MPs or peers been so diminished in stature, at the very time when the bloated apparatus of the state has been intruding on our lives more obviously than at any time before.

The third, closely related shadow is the still barely understood extent to which the politicians have handed over the running of our country and the making of our laws to that vast and mysterious new system of government centred on Brussels and Strasbourg, all of which is related to the final huge shadow – the way our politics has become permeated by everything which can be related to global warming.

Having made the points at some little length, Booker notes exactly the same phenomenon to which we have been referring – they way three virtually indistinguishable parties squabble over trivia, leaving the electorate without any clear alternative. His feeling is that on 6 May, almost half the voters may well stay apathetically or sullenly at home.

My great concern is that, as the campaign develops, people will get caught up in the drama and, having focused on quite how awful Labour is, turn to Cameron's not-the-Conservative-party as the antidote. What is so desperately needed is the recognition that choosing between disasters still ends up with a disaster.