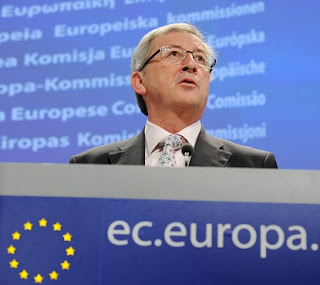 The "colleagues" – namely eurozone finance ministers - must have been pretty desperate (or worried) to turn out on a Sunday, although it was a teleconference rather than a physical meeting. Even then, what they seem to have announced could have waited until tomorrow ... or not. What do they know that we don't?

That would be a stupid question if it was meant as anything other than a rhetorical device, highlighting that, when it comes to Greek finances, more than a few things do not add up. And we're not just thinking about the accounts.

Anyhow, the news came officially at an afternoon press conference in Brussels, following which Bloomberg and others reported that a "rescue package" had been cobbled together for Greece, worth "as much as €45 billion".

This is to cover the €11.6 billion needed by the end of May to cover maturing bonds, on top of another €20 billion by the end of the year to pay debt coupons and finance this year's deficit.

As to following years, it was well into the evening before Reuters issued a correction, stating that the aid would be "significantly higher" than €40 billion. This was from an unnamed official who said "it would be logical" for it to amount to some €80 billion over the next three years.

And, contrary to earlier predictions - the money will be available at a variable rate, but below what it would cost it on the market. The level is currently calculated at about five percent for the member state contribution, and less for the €10-15 billion coming from the IMF.

Nevertheless, Greece is still declaring that it intends to seek money from the market. Only in the event that it is unable to get the requisite finance will it ask for the help, when an as yet unspecified "mechanism" kicks in. Or, that is the theory. In fact, there is an amount of incoherence in the statements.

Contrary to the public optimism of the Greek government, the Eurogroup – as it likes to call itself – says it is offering the loans at "non-concessional interest rate", in order to "set incentives for Greece to return to market financing." This makes it sound as if the loans are a done deal, with Greece already planning to take them up.

On the other hand, Luxembourg prime minister Jean-Claude Juncker (pictured), who chaired the tele-conference is saying officially that the money would come only "if needed". But it seems this is said at the behest of the Germans. It is they who are saying that Greece needs to try, and fail, to borrow on financial markets before it gets help – and this may be for domestic consumption.

Quite how the markets will react is anyone's guess – no doubt traders and bankers too are trying to work out precisely what is going on. We will be seeing some sort of a response later today. A Greek finance ministry official says that the reaction over the next few days "will determine future developments."

This sounds an awful lot like hubris. The man may yet have to eat his words.